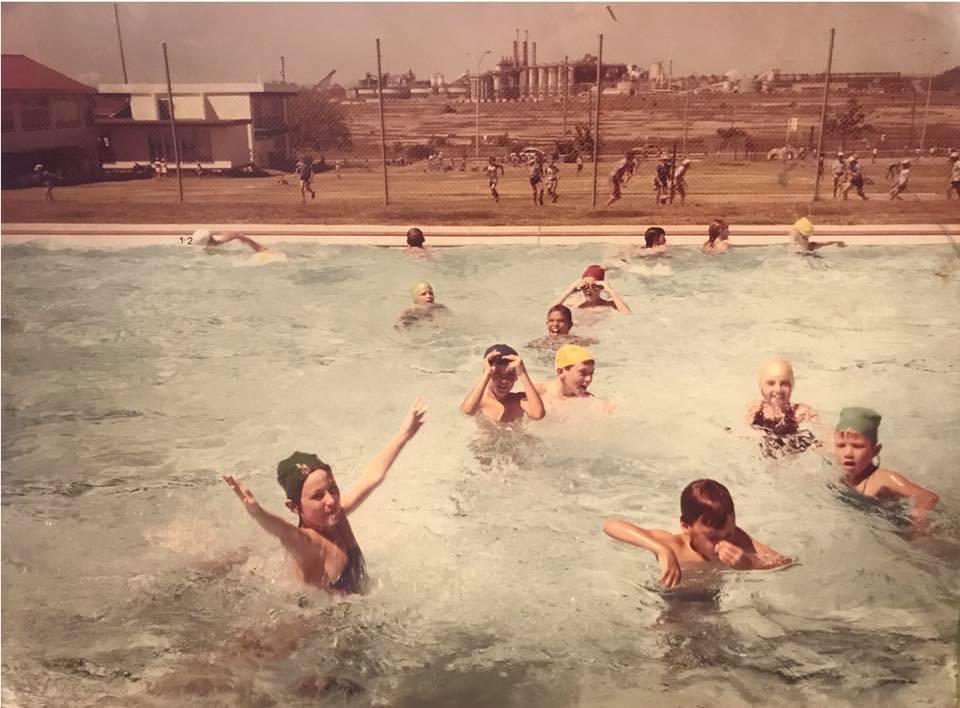 Posted at 08:46h in Education, Local, News by News 0 Comments

A photograph of Gladstone South State School pool in the early 1980s re-posted on popular local history Facebook group “Gladstone Remember When…” has elicited a huge response from long-time locals and past pupils of “The School with the Pool.”

While the memories recounted in the comments are overwhelmingly happy, sharing joyful stories of hugely anticipated free-swimming sessions at lunchtime, there is one local family for whom the GSSS pool has a sad and special significance.

Sue Fewtrell was 21 when her younger sister Ann, six, drowned at a Boy Scouts’ end of year breakup held at a natural swimming hole near River Ranch in Calliope in 1979.  The youngest of Peter and Bridget Orridge’s six children, Ann had gone to the event with her parents and brothers David and Graham.

“My dad loved Australia, but being English people we didn’t learn to swim over there. I learned to swim when I was older, but Ann, she hadn’t got to that stage yet,” she said.

Nobody knows for sure what happened, but Ann became caught under the water momentarily and began to drown. Her father, a security officer at QAL and trained in resuscitation techniques kept her alive on the 30-minute drive to Gladstone Hospital but sadly Ann passed away that night.

“He was devastated. We all were, but Dad especially, because he’d kept her alive all that time,” Sue said.

Ann had been a student at Gladstone South State School and the family were aware of the school’s efforts over the years to fund a swimming pool, for lessons for the children. Through their overwhelming grief, Bridget and Peter had the idea to ask for donations for the pool in Ann’s memory.

At a time when asking for donations in lieu of flowers was uncommon, and Lawrie Lawrence’s swim-safety advertisements did not exist, Bridget and Peter’s beautiful gesture has potentially saved hundreds of children’s lives: “For them to have thought of others was just amazing. They just thought it was the right thing to do, I suppose,” Sue said.

In a letter written to the Orridges on the 26th of February 1980, Valerie Watt, the then -secretary of the South School Parents and Citizens Association said: “Out of your recent sorrow, the contributions to this fund, as suggested by you, has meant that the building of the pool will be a reality much sooner than anyone had expected.”

Sue said she was so happy to hear via the comments on the published photo that her sister’s legacy has touched the lives of so many local people. She thinks of her sister when she passes the pool, fittingly located on Ann Street in South Gladstone: “I’ve always called it “Ann’s Pool,” she said

TOP COMMENTS FROM FORMER STUDENTS AND TEACHERS OF GSSS:
Mel Cook: I was a GSSS year 2 teacher in 1982 and I remember taking my class to their swimming lessons. They were SO excited! One mum told me her daughter (Kyle T) slept in her togs under her PJs just so she wouldn’t be late. Mr Dart was very proud of South’s pool. Good times.

Barbara Reid: I learnt to swim in the mid to late 80’s I remember doing the surf lifesaving badges. Was also in the swimming club late 80’s early 90’s even managed to get my name in the record book once

Sally Johnson: This was my school from 1987-1993! The pool was great and Mr Dart was one of the best memories. A wonderful man and great Principal! Good times!

Valerie A Jones: I was the P&C Secretary … and the fundraising for the pool took a huge amount of effort. One thing led to another in money raising when a parent in grade one organised a Lamington Drive and when finished stated ‘I bet Grade 2 can’t do any better’ … well, it was on. The number of Lamingtons that were made when grade 7 finally did their turn was amazing .. I think everyone was fed up with chocolate and coconut by the end. Two things need to be remembered – 1: all the lamingtons were fully homemade and put together by teams of parents under the buildings … and 2: I think we only made 20 cents a dozen at the time.

John Sharon Murray: I played footy and cricket on the field behind it. It had a slope of about 15 degrees. This was in 4 stone seven and five stone teams. The foam pads in our footy shorts made us nearly as wide as we were tall.
The principals son (surname Maddern??) (I need help here Kevin N Lynn Burston, Kelvin Bullock). We had it pegged one game. Smeared our legs with grease like the men did. Only “grease” available was a drum of sump oil that was used to mark the fields. Smeared all over our legs, Star of the Sea won of course.
Circa 1965/66 or so. And we walked home after games, me to High School, Kevin&Lyn Burston to Barney Point and Kelvin to Hospital….Not today.