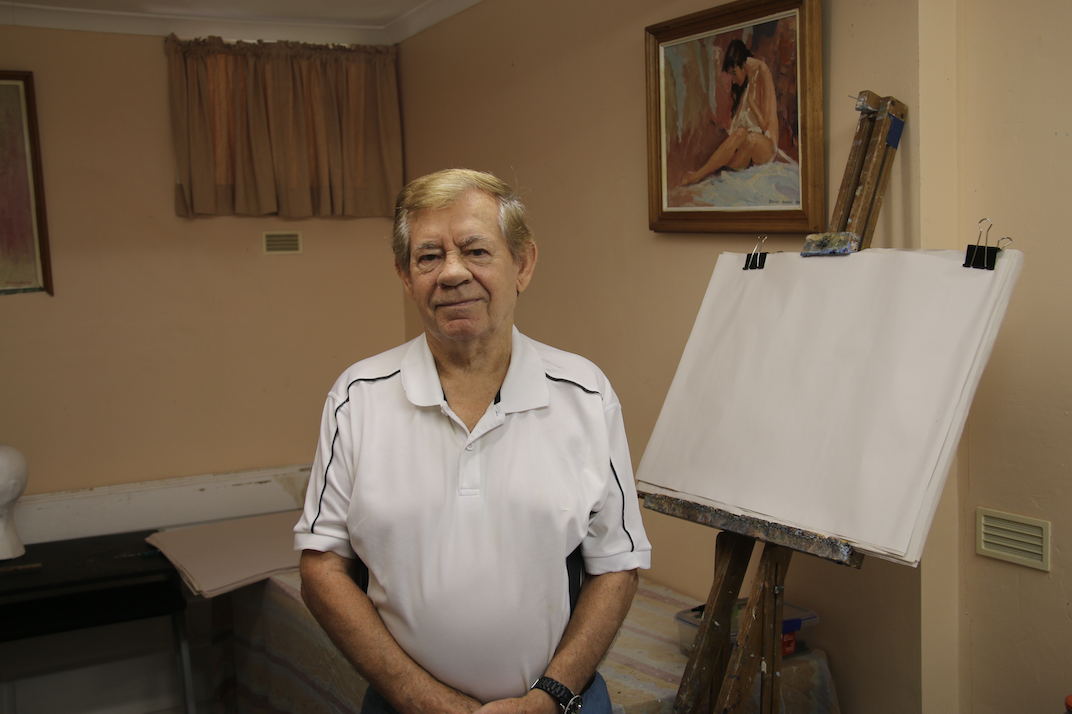 Where do you live/work? Where is your studio?

David lives in West Gladstone, he is pictured in his studio, a workroom on the ground floor of his home.

What have you entered in this year’s Rio Tinto Martin Hanson Memorial Art Awards?

David entered two oil paintings in this year’s Martin Hanson Awards: “I entered two ladies “Julie” and the other one was “Joanne”

Tell us a little about it:

“They are portraits of women, rendered in oils. The prize I won in the Martin Hanson was a landscape but I have branched out. I go to life-drawing lessons on Thursday night at Crow Street Creative, we draw, for three hours down there, and I have been more drawn lately more towards figures and that sort of thing. But I do need to get back on to landscapes because I do like them.”

What inspires you to create art?

David says he has been drawing since he was 6 or 8, but he didn’t pick up a paintbrush until he returned from Europe as a 22-year-old after spending two years working in Scotland: “And I have been into it off and on ever since then,” he said.

“It’s the beauty of it, it’s very absorbing,” he said. “I don’t like to watch a lot of television, and it’s a beautiful pastime to have. I have a keyboard and I play the saxophone as well, I’m lucky that I can do those kinds of creative things.”

David says as a retired civil, structural and local government engineer, his skill as an artist is an extension of his career: “You do the design for the construction of a road or a bridge and you have to have a really strong idea of the proportions and be a good drawer and a good visual thinker. I can’t think any other way.”

Why do you think Art Awards like the Martin Hanson are important?

“They are important just for the local artists just to keep on going I think – every year there’s this great event to look forward to.

“It’s the only competition I put my art into. Next year I will think about some of the other art exhibitions too, but up until now, for forty-two years, I’ve just been putting an entry into the Marty Hanson,

“Not every year, better than half of the time though. Not when I was working down in Melbourne or up in Proserpine, but when I was home I always put an entry in,” he said.