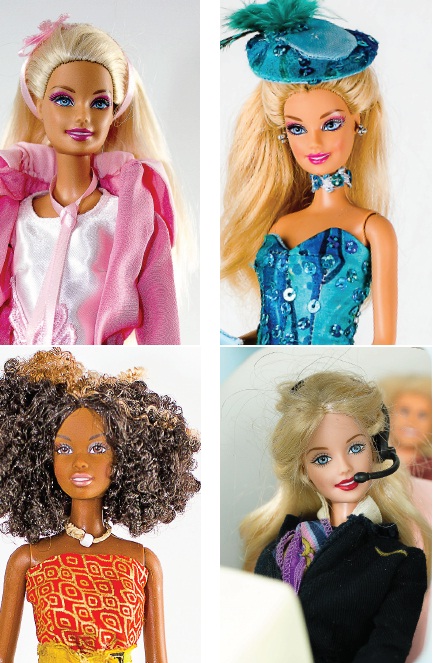 From this Tuesday, Gallery 67 on Goondoon Street will be hosting an exhibition illustrating six decades of fashion, modeled by Barbie herself. Local fashion and Barbie lover, Marina Hobbs is behind the exhibition and will dedicate all proceeds from the exhibition to the Queensland Cancer Council.

Marina says the project started three years ago when she  began making clothes for her niece’s Barbies. As a former home economics teacher it was quite fun to construct the little outfits, and soon a friend had let her know that there were a number of Barbies advertised to be given away on a Gladstone classifieds page.

Marina soon ended up with quite a few Barbies and decided to start dressing them through each decade’s styles. She started learning more and more about Barbie and the brand Mattel and how the dolls have progressed over the years from toys to collectors’ items.

Now with over 350 Barbies from op-shops, eBay and from family and friends all over Australia, Marina decided to share her new interest with others.  After months of hard work getting the dolls and displays ready, the exhibition will open this Tuesday the 11th of October at 6pm and will run until the 28th of October. The exhibition will include original Mattel dolls, collectors dolls and ‘rescued’ dolls in one-of-a-kind outfits.

In 1958 Mattel made the very first Barbie and went through a number of changes to the doll in the first year. Over the years, the brand has been quite progressive in staying current and diverse. In the 80’s Mattel created a series called ‘Dolls of the World’ which featured Barbies from all different cultures. In the 90’s Barbie also became more career driven, trying out occupations such as a pilot, gymnastics coach, and veterinarian.

If you would like to check out six decades of Barbie and fashion, check out the exhibition starting this Tuesday. A gold coin donation gets you entry and their will also be over 60 Barbies up for sale with all proceeds going to the Cancer Council.