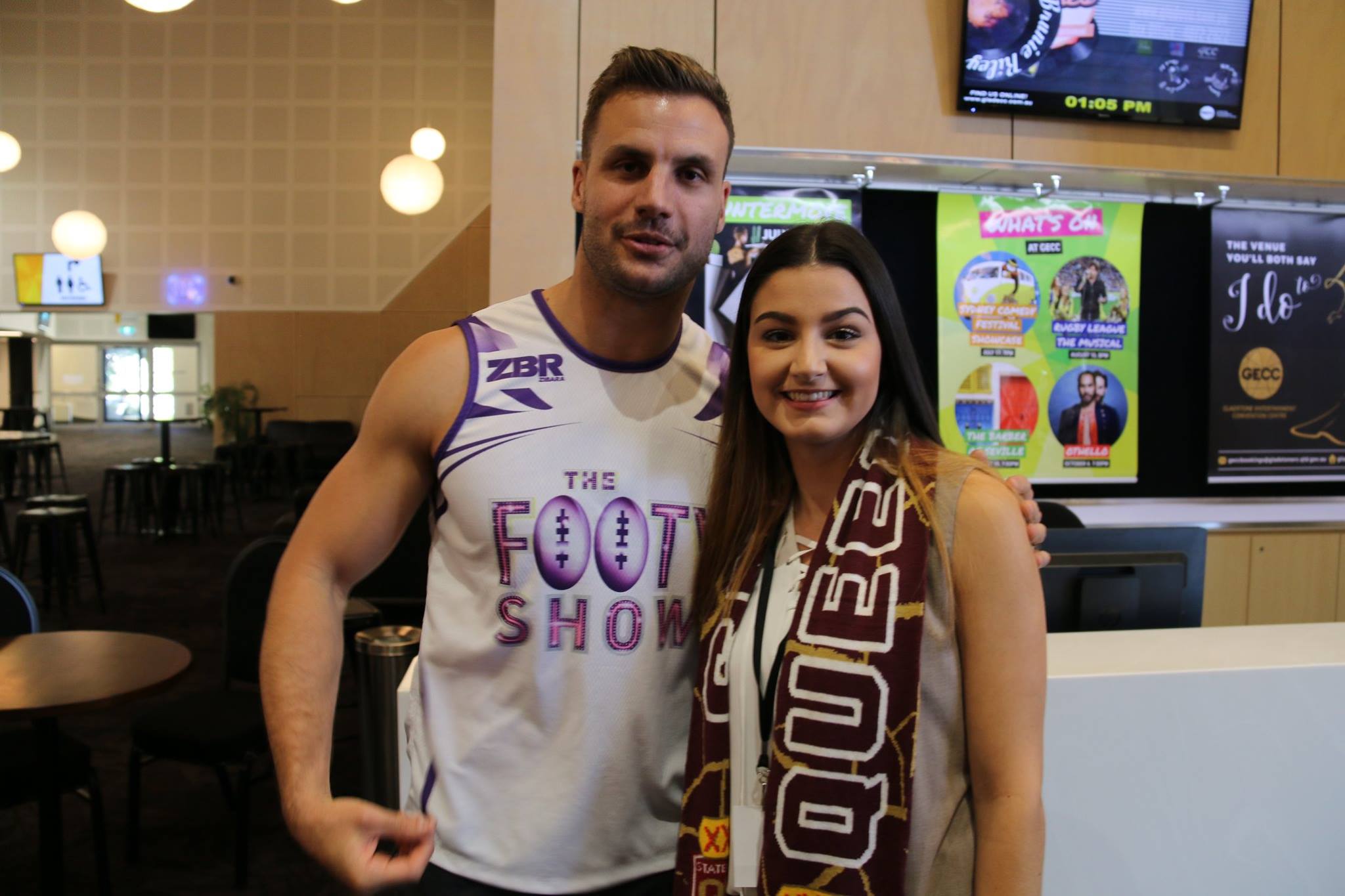 As you may know, the Footy Show’s Beau Ryan was in Gladstone today to film his ‘Beau knows Gladstone’ segment and it was a VERY big day for Gladstone with the arrival of the Maroons Origin team for Gladstone’s very own Origin Fan Day BUT there was a major stuff up which saw our famous guest getting the silent treatment. Now we need help from Gladstone to make it right (or help fix it). A mistake has just become a huge town challenge.

Let’s take you back to the beginning. (unless you hate reading – then scroll to the video at bottom and press play – it may give you the silent treatment)

There was a street parade where thousands of keen footy fans lined Goondoon Street and took happy snaps with their favorite players, there was a luncheon where lucky people got to have a sit down lunch with the entire team, a coaching session and then there was a Gladstone News exclusive interview with Beau Ryan. Yes, the Beau Ryan from the footy show did an interview with Gladstone News.

Yiota our newest recruit was put in the spot for her first celeb interview. She said ‘My big moment happened when the Maroons players were comfortably sitting at the table ready for lunch when the great Beau Ryan waltzed in un-announced with his film crew. We knew this was our moment, the moment to make Gladstone News shine and we took that moment with both hands, asking Beau if he’d be willing to do an interview for our awesome magazine. He graciously obliged, and the interview was officially about to happen.”

Yiota was a little panicked  (this was her first ever real celebrity interview!) but after being briefed by content director Karina she was confident to start her first ever interview for Gladstone News – piece to camera.

”It started off well – we connected on an ‘I’ve just met you but you’re friendly so let’s go with it’ sort of level. I joked about what he was doing here, asked him if he’d ever dated a Greek girl, told him how fit I was because of my new gym regime (exaggerated more like it) and challenged him to an arm wrestle. To see who won you’ll have to watch the video! The interview was going great, I even got him to make a video for our brand new Gladstone News Snapchat account (our username is gladstonenews) and at this point I was sure I had reached interviewer pro status. ”

The Gladstone News team thanked Beau and took a quick photo before saying goodbye and whipping out the laptop to check footage. OHHHH NOOOOOOO! … silence. He looks good, but there’s a problem. When we played back the interview footage and there was NO AUDIO. we repeat, NO SOUND WAS RECORDED. The external microphone battery had died and our whole ‘big moment with Beau Ryan’ interview had been a silent movie with HD graphics. HA HA….WHAT A FLOP!

After watching the silent footage Karina, owner of Gladstone News said ‘this is hilarious, we have a two minute interview with only vision and no sound, lets ask the internet for help. We can get people to sound dub or caption what they think was said! Recreate the interview with help from our online friends, ‘

So our mistake has just become your new challenge. Gladstone, we want you to laugh at our stuff up just as much as we have. We think this vision is bloody hilarious and want to make the best out of this situation! The interview video is embedded below – check it out and send us your best captions or video dubs for the interview.

We’re talking write out a short script, make a silent movie with subtitles or go the whole hog and make a full on video with voice dubbing – the choice is yours! Let’s see who can voice the funniest Beau Ryan and tell us what you think was said in the interview.

Submit your entries below or email us at news@gladstonenews.com.au and we’ll upload our favorites! Help our humiliation become humor!

Sorry Gladstone – nobody likes the combo of a high-profile celebrity and a low microphone battery. The end of the day, you have to laugh at mistakes and not sweat the small stuff. It was great to see you Beau, next time we may listen to you more than we look at you.