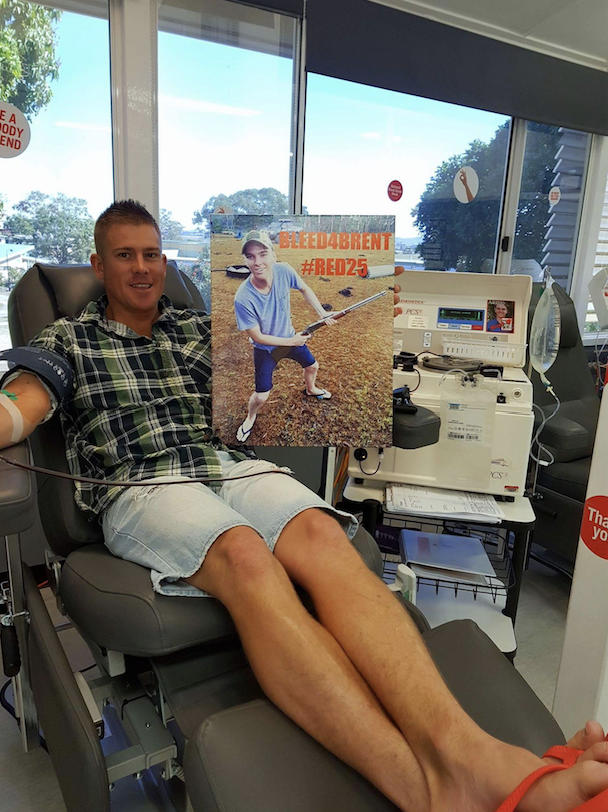 Only eight months have gone by since Daniel Whitby lost his best mate, 20-year-old Brent Holland, to acute myeloid leukaemia (AML), and already “Bleed 4 Brent” the Red Cross Blood Donor group Brent’s family and friends started in March is at the top of the Gladstone tally for most blood donations in 2017.

Brent was a local lad and an apprentice at Gladstone Ports Corp when he was diagnosed with leukaemia and flown to Brisbane at 19.  He spent the next 9 months having chemo, radiation and a stem cell (bone marrow) transplant at the Royal Brisbane and Women’s Hospital.

Brent’s family, mates and workmates have honoured his brave battle and positive attitude by banding together to both make and promote blood donations.  “Bleed 4 Brent” encourages people in Gladstone, and beyond, to give blood, plasma and platelets if they can. Blood is always desperately needed by somebody like Brent – someone’s friend, someone’s brother, someone’s baby. Possibly even themselves.

Daniel knows this only too well. He had his spleen removed after a car accident when he was 18. “I originally had two litres of blood given to me,” he said. “I’ve given my quota back and kept on giving”.  Brent’s on-going need for platelet donations throughout his year-long fight against leukaemia inspired Daniel to donate platelets at the Robina Blood Donor Centre on a visit to the Gold Coast.

Due to their short 5-day shelf life, direct platelet donations can only be made in South East Queensland. Certain centres in the Sunshine Coast, Toowoomba, Brisbane and Gold Coast areas have the special apheresis machines used to extract and collect the platelets and plasma and return the remaining red and white cells to the body.  Platelets are the clotting agents in the blood.  If a person’s platelet level is too low, spontaneous internal bleeding can occur and injuries which would usually be very minor can become significant. Platelet donations are used by cancer and leukaemia patients (particularly during chemotherapy and bone marrow transplants), and also for surgery, trauma and liver disease.

During his first platelet donation, Daniel was stoked to learn that his blood contains particularly high levels of platelets. “Most blokes are around 150 – 250. You are doing really well if you have 250. My count is 329.” “The Red Cross nurses told me that my donations are pretty much equivalent to 2 donations from other people.  That inspired me to schedule in a donation whenever I travel down to Brisbane to catch up with family and friends. I try and tee-up other family members to donate at the same time so we can catch up and help others at the same time. There is plenty of time to chat while we are in the chairs”.  Due in part to potential antibodies in female blood, platelet donors are healthy males aged 18-70. “When I realised how many patients like Brent my platelet donations could help and how hard it is for the Red Cross to get straight platelet donations due to gender and location restrictions, I was determined to make the effort”. When he was one of the two winners of a travel voucher at the Botanic to Bridge race Daniel immediately earmarked it for a trip to donate platelets.

When he is home in Gladstone Daniel donates plasma regularly at the Gladstone Donor Centre. Platelets and plasma can be donated every two weeks and whole blood every three months.  “Because they are open until 7 pm three days a week, early mornings the other two days and every second Saturday I can always find a time to fit in with my work.”

Daniel said “I am trying to make it my mission to tell other people, give them little bits of facts to get them along and give blood. Trauma, in my case, when I received blood, uses only six percent of blood donated.

One-third of blood donated is used in various forms to help cancer patients – and most of us know someone who has battled cancer.

Seeing my young mate have so many transfusions, and knowing that the extra time he got to spend with us before we lost him was largely due to blood donors really brought the importance of donating home to me and those around him.

He used those donations to get out with us and enjoy the time he had left. He really inspired us with his efforts to keep going and we are trying to give others the same chance. The nurses at the Gladstone Donor Centre have said that it has been great to see Brent’s mates come in and increase the numbers of younger donors. They have really supported our group and on certain days they wear our trademark flannelette shirts in honour of Brent”

Daniel said that he is trying to encourage people to donate regularly and not to just make one-off donations. “I hope that Brent’s story can show people how much of a difference their donation makes”

Make an appointment to donate blood TODAY by calling 13 14 95.  When making your appointment or when you get to the blood centre, you can indicate that you would like your donation to be recorded as part of the Bleed4Brent campaign.  Keep up with developments by checking out their Facebook page: