Brisbane to Gladstone Traditions Live On

As the crews competing in the Brisbane to Gladstone prepare to enter the 70th race, there is a lot of talk in town about bringing back the old traditions.

But aptly named Marina Hobbs, who with her husband Ray has a 27-year association with the Yacht Club and our state’s premier yachting event, says some traditions are better left in the past:

“We are not bringing back the tradition of having Rugby scrums in the yacht club,” she said.

She is organising the downstairs event on Easter Sunday at the Port Curtis Sailing Club this year and assured us that the all-out, no-holds-barred parties were a thing of the past. The go-kart races down Goondoon Street are sadly not returning either.

“The yachties themselves are all a bit older these days – there are lots and lots of stories about the after-party particularly in the Eighties and Nineties – but it’s far more of a gentleman’s drink and a pleasant Sunday session downstairs, with some live bands. Sitting around having a nice Sunday afternoon watching the yachts with a wine and cheese,”

This year the Yacht Club is hosting a Sunday Session welcome party which will go from 2 pm through until late and it’s likely there’ll be plenty of yachts to admire throughout Easter Sunday.

A Sunday Roast buffet meal for the Yacht crews and families will pay tribute to the old race tradition where crews were billeted in local homes, and to help feed the hungry sailors, each family were given a piece of roast meat to cook. In 1949, visiting sailors were also made Temporary Yacht Club members for one month; this tradition continues.

“The latest I’ve heard is that it will be a reasonably fast race, about 15 to 20 knots which will be good; that still gets most of the boats here through Sunday,” Marina said.

With the entire race live-streamed this year, and yacht trackers in use for at least five, Marina will know to the second when husband Ray, the skipper of multihull “No Problem”, rounds Gatcombe Head, but it wasn’t always so easy:

“The finish line used to be off Auckland Wharf and it was open to the public in those days –  we’d take the four-wheel drive, food, chairs, fishing rods – everything we thought we’d need for two days and we’d drive on to the wharf and set the kids up and we wouldn’t leave, because you knew the minute you left, you’d miss them.”

“We used to hang out there on Auckland Wharf and watch the boats finish,” Marina said. “Race control was in the old VMR building, they couldn’t see anything, they relied on tides, and timing and calculations of how long they thought it would take.”

“There were a couple of times when a boat would be sailing past us, I’d call race control and I’d say, “Oh, Hammer of Queensland just finished” and they’d say “No, no, Marina, it’s nowhere near yet.” “And I’d say: Well, it’s just gone past us”

The first time Ray Hobbs tried to compete in Restless in 1991, they didn’t make the starting line:

“They were on their way to Brisbane on the delivery trip and they dropped the mast on the Wide Bay Bar, so they turned around and motored home,” Marina said.

“But that first year was the only year he’s missed, he’s done every race since then.”

“No Problem” is again the only PCSC entry in the multihull event, joining local monohulls “Restless”, “Tuan” and 50-year race veteran “Wistari” at the start off Shorncliffe Pier on Good Friday.

They’ll have some stiff competition from the new 100-foot Black Jack, and the ever-competitive Reichel Pugh designed maxi Alive to bring home the Courier Mail Cup. Catch all the sailing action here in Gladstone, as we party through the Easter weekend! 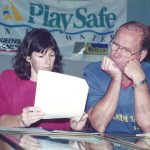 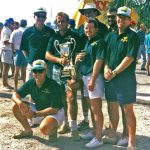 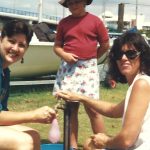 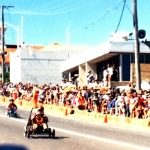 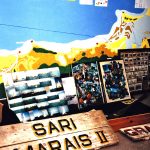 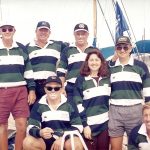 The crew of Restless 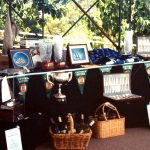