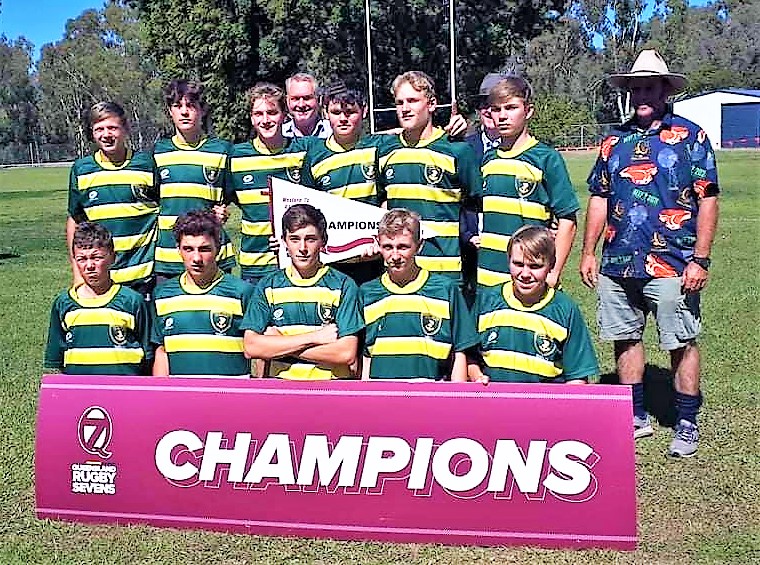 Chanel College’s U15 Boys Team have beaten nine rugby union sides to be crowned champions of the Western 7s Carnival.

The competition, which took place in Emerald on July 31 and August 1, featured the likes of rugby union powerhouses Rockhampton Grammar School and St Brendan’s College (Yeppoon).

Chanel was full of confidence however, having a win at the Hervey Bay 7s Carnival earlier this year, and taking home the title of Hervey Bay Champions for the first time ever.

The boys started off day one with an impressive win against St Brendan’s and ran out winners of that game with a score of 38 – 7.

They went unbeaten in the pool stages of the two-day carnival, meaning they were set up for a Grand Final against a strong Emerald State High School team on day two.

The first half of the final started off slowly, with Chanel leading 7 – 0 at the break, but the flood gates opened in the second half and the team were victorious with a final score of 34 – 0.

Coaches Calvin Bennett and Glenn Galea said the side was the first Boys Team from Chanel to win a Grand Final in the seven years the college has competed in the Western 7s Carnival.

“Our Team Captain Ty Fitzgerald was named Player of the Grand Final, and a special mention must go to Carter King who managed to score twelve tries over the carnival, and has scored twenty-one tries this year alone,” they said.