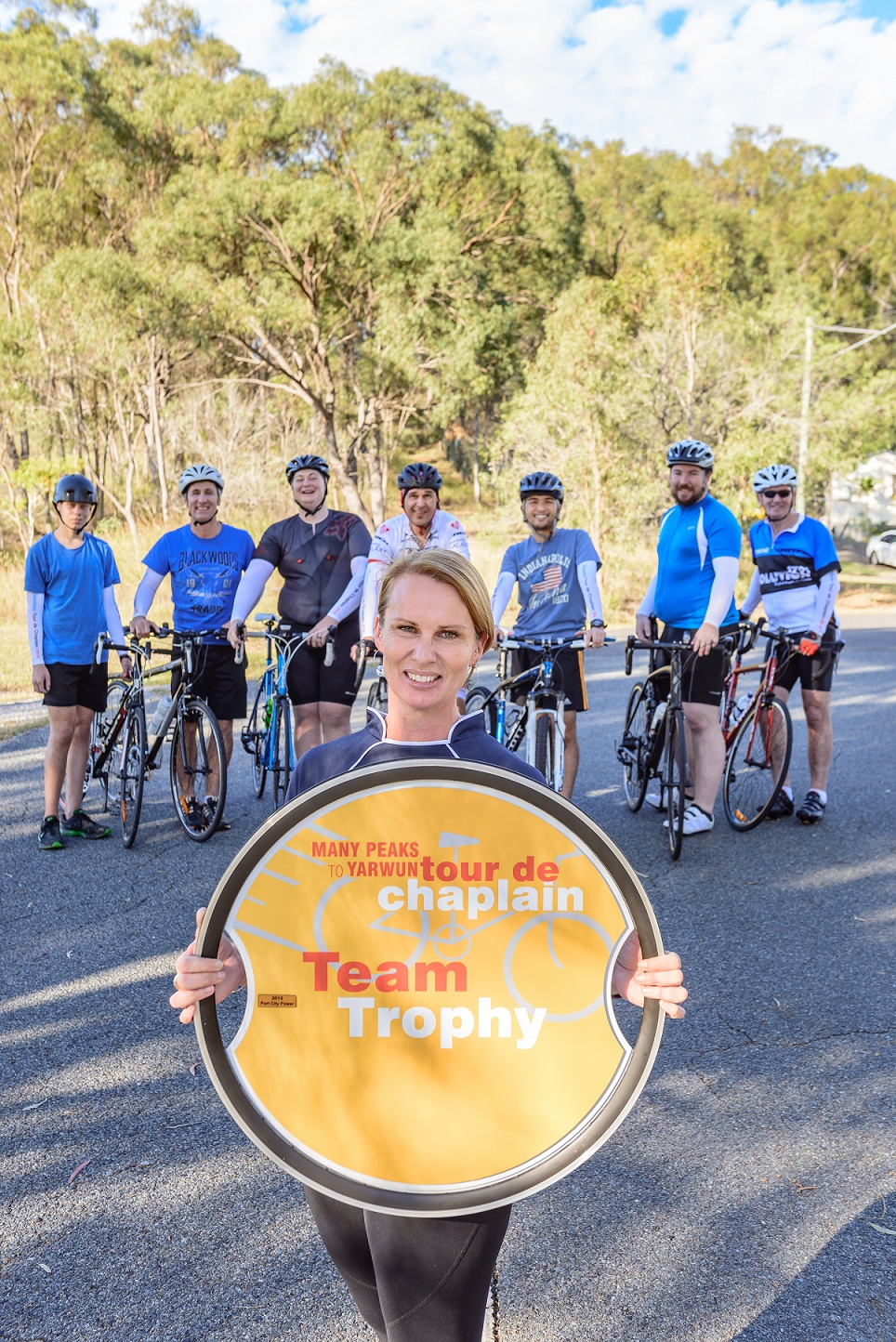 Last Saturday 82 riders took part in this year’s Tour de Chaplain to help support and raise awareness for the 10 local Chaplains that work across 14 primary and high schools around our region.

The event was a great success with almost double the amount of riders compared to last year and an amazing turn out of supporters and spectators cheering on the riders. Starting at the Grand Hotel in Many Peaks, the riders made their 100km journey to the township of Yarwun with perfect weather conditions setting the day. Mick Newell was the first rider to cross the finish line in just 2 hours and 59 minutes, with John Earl and Stede Kingsbury coming in second and third.

Gladstone & District School Chaplaincy Committee Chairperson Kate Frost said “The Tour de Chaplain is a practical way of supporting our local chaplains while enjoying the great scenery of our local region. The funds raised support our ten local chaplains and assist us with continuing this great service. It was so exciting to see this year’s event grow and be so well supported by our local community.”

With a massive $3630 raised, Port City Church took the title of Fund Raising Champions and snagged the Tour Trophy.

Team Captain Michael Cusack said “At Port City Church we have supported our school Chappys for many years and would like to acknowledge the very important role they have in our local schools in the Gladstone region. Not only supporting our young people but their families and the school communities as a whole.”

He added “It is a real privilege for Port City to be named the top fundraising team again this year. A huge thank you to everyone who donated to not only Port City but to all the teams and riders. Well done to all the riders taking part and I’m sure you enjoyed the ride knowing it was for such a great bunch of chappys. Also a big thank you to all those who have put in so much hard work leading up to the day and for the many volunteers who have helped out today to make the Tour de Chaplain a really great event.”
“I believe we have well exceeded the fundraising goal for the event so well done everyone and look forward to Tour de Chaplain 2017.”

ovided complementary arm protector sleeves to each of the riders to commemorate the ride and the day was completed with a BBQ for riders and friends. Glenn Butcher was in attendance to award the fund raising champions their trophies, and Councillors Glenn Churchill, Rick Hansen, & Desley O’Grady were also there to show their support to the riders. Overall, the day and the lead up to the event was a great success with over $19 500 being raised!

“From the saddle whether whizzing a long at 30+km/hr like the fastest, or sauntering along with the crowd, you couldn’t help but experience the serenity of rural Gladstone.  The views, the running streams after recent rain, the scent of lemon gums and new friends made along the route. The Tour de Chaplain is everything you could want in a hundred kilometers at your own pace whilst raising money for a really worthy local cause. All the food and snack were by provided by volunteers including an awesome breakfast by the Boyne Valley Lions Club for $10.  Who could go past all the yummy snacks at the stops, most of them donated by people attending their local church.  Then there was the yummy lunch by the Boys Brigade and the final BBQ by Lifestyle.  Glenn and Theresa Butcher attended and Glenn presented the trophies and the random riders draw prize of $500 from M1 Cycles.  Who could forget all the support from Chaplains along the way and their willing helpers using their time and fuel to provide support. Wonderful support from Gladstone Regional Council to keep the riders safe and three Councillors came to our end celebrations, thank you to Desley O’Grady, Glenn Churchill and Rick Hansen for your time. This ride is on every July leaving Many Peaks and heading for Yarwun. We hope you can join us in 2017.” – Jill Hopson, GDSCC Chairperson & Tour de Chaplain Participant

At the beginning of the Tour de Chaplain, rider Jonathan Davies pulled his bike over after he was having some trouble with his bike seat – the seat had become completely detached. A passing fellow rider had rode past giving Jonathan some cheek about stopping, and without hesitation he go back on his bike and continued riding. Jonathan rode the entire rest of the journey (another 80km) without a seat. Up hill and down hill. Gladstone News would just like to say a big ‘Good on you!’ to Mr Davies for not giving up and pushing himself where others might not!

More Photos from the event