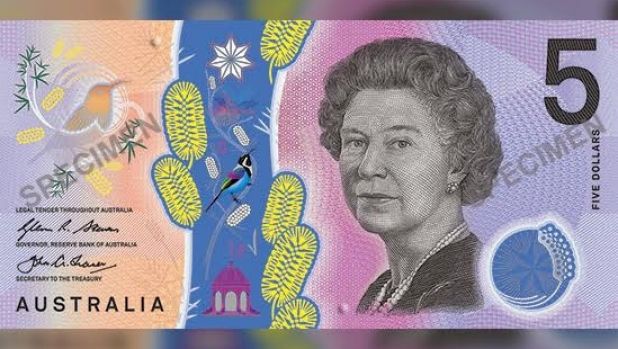 Posted at 10:55h in Business, News by Karina 0 Comments

The Reserve Bank of Australia has unveiled to the nation the bold and high-tech designs for a new $5 note as plans ramp up to begin circulating from September this year.

The RBA said many aspects of the old $5 note had been retained – including some colour, size and the image of Queen Elizabeth II on the signature side and Parliament House on the back – were retained to make it easy to identify.

Anyone who takes a quick glance at the new design will notice splodges of new colour have been added. There are new purples, pinks, oranges, blues and some bright yellow wattle right down the middle.

“There is a new ‘tactile’ feature to help the vision-impaired community distinguish between different denominations of banknotes,” the RBA said.

RBA Governor, Glenn Stevens, said there were serious reasons for putting out a new note.

“Innovative new security features have been incorporated to help keep Australia’s banknotes secure from counterfeiting into the future,’’ he said.

“As can be seen in the images, these include a distinctive top-to-bottom window. Each banknote in the new series will depict a different species of Australian wattle and a native bird within a number of the elements. On the $5 banknote, these are the Prickly Moses wattle and the Eastern Spinebill.”

We have prepared the top 5 best suggestions for a re-make:

The new note is certainly a striking design compared to our current and historical currency. However they have nothing on the brilliant “straya” currency designs by artist Aaron Tyler. His $5 note includes Dame Edna and the MCG.

What do you think of the new Australian $5 note design?

Let us know in the comments or on Facebook.