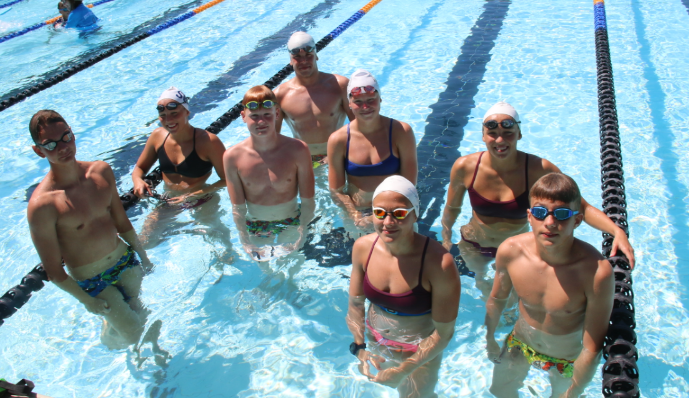 Winning Olympic gold is the ultimate goal for eight swimmers currently training at the Gladstone Aquatic Centre for the last month – but it won’t be a medal for Australia.

Gladstone Gladiators Swimming Club head coach Tom Fronek moved to Australia thirty years ago from the Czech Republic but still maintains his swimming contacts in his country of birth.

He says concerns had been raised that the landlocked nation, bordered by Germany, Austria, Slovakia, and Poland, had never won an Olympic medal in swimming, one of only maybe two countries never to have done so, according to Tom.

“I work with the Czech Republic swimming association and I go over there once a year and run a camp over there,” he said.  “The idea came about that there is a big need to step up to the next level – so I selected four swimmers –  to come and train with us,” coach Tom said.

Perhaps understandably with the European winter approaching, the opportunity to train for six weeks in sunny Gladstone was more popular than expected:

“There was quite a long list of people who wanted to come along, so we doubled the intake to eight swimmers, four boys and four girls aged between 12 and 22 years old,” he said.

“They’re not only working on technique, but we’re working on different ways of training,” coach Tom said.

A team manager has accompanied the eight and Tom says a feature of the training camp is they are learning independence: “there is a team manager with them but they are cooking their own evening meals and walking to the pool each day for training,” he said.

“The youngest swimmers, the 12 and 13-year-old they are embracing it the most, they are really working hard and they are coming along really marvelously,” he said.

Good enough for a Czech swimmer to beat an Australian swimmer to Olympic gold? “I work with the young swimmers but it’s not going to happen soon,” laughs Tom.