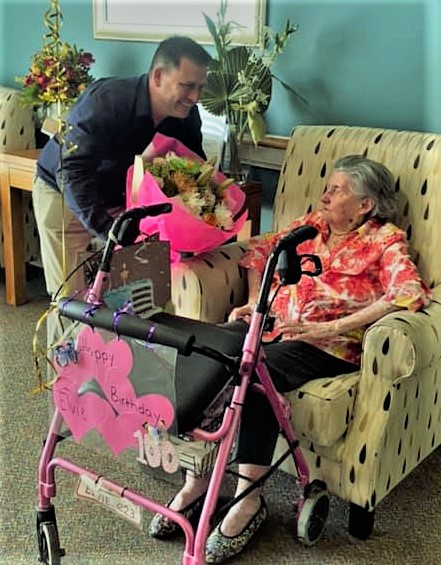 What a wonderful milestone Elvie reached on 13th October 2020. On Thursday 15th October 2020, the council attached a plaque on the Centenarians Totem pole situated in the Gladstone Botanical Gardens. They also planted a tree in honour of Gladstone’s newest Centenarian. Elvie’s family all gathered around her on the weekend of the 3rd/4th October to celebrate her wonderful 100 years. The usual Gladstone Council & Gladstone National Seniors group gathering at the gardens was a simple plaque attachment. The Mayor, Matt Burnett, made a presentation of a beautiful bouquet of flowers and a suitable congratulatory card to Elvie at New Auckland Place.

Elvie was raised in Calliope with her parents Annie and Dave Aldous and her four brothers. One brother Eric remains living in Gladstone. She had such a happy childhood and gave up a nursing career to marry Cyril (Sardy) Brown. They had known each other since schooldays. Elvie’s father built them a house on Taragoola Road and in the 1960’s they moved to Sunny Hills to milk cows and they stayed until they retired. The farm belonged to Elvie’s grandparents, Tom and Lucy Wright. Elvie had five daughters and now has six grandchildren and six great-grandchildren. She was widowed in 1998 but stayed on the farm before moving into Calliope then eventually to New Auckland Place.