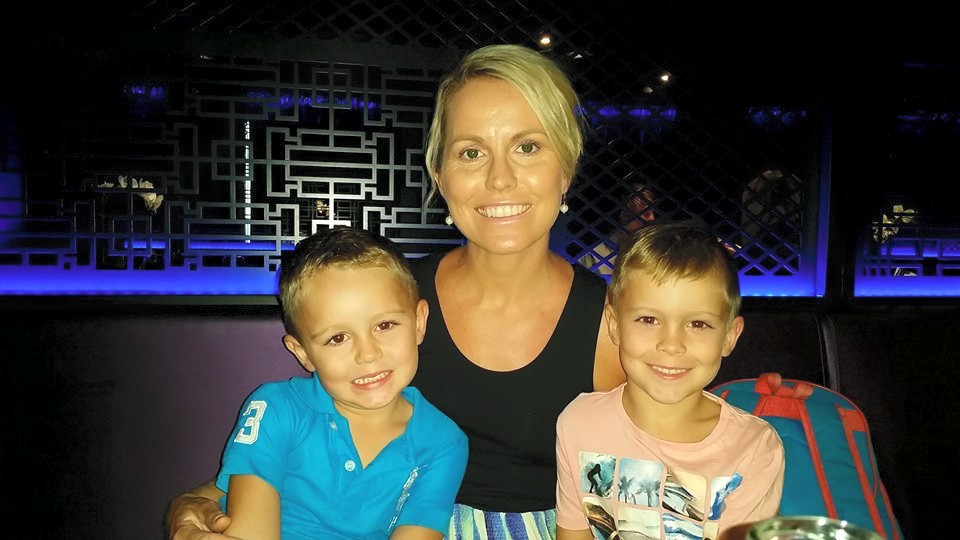 FROM THE FACE OF RELAY FOR LIFE KIARRA WHELAN

She thought she was too young and it was older women that got it.
She was a single mum of two, one and three years old boys, facing a
cancer diagnosis that left enormous uncertainty ahead.

Kiarra had a rough six moths prior to the diagnosis with her sister going
through treatment for cervical cancer, her father passing away from
pancreatic cancer and dealing with a very painful marriage separation.
After losing lots of weight from stress (or what she thought was stress)
left a large lump that was very noticeable. She had no other symptoms
whatsoever.

After diagnosis the next few weeks were intense, she travelled to and
from Brisbane seeing breast surgeons, oncologists, IVF specialists,
naturopaths and radiation oncologists. Kiarra was told she would need
six months of chemo, six weeks of radiation and an additional 12 months of an oncology treatment called Herceptin.

She was booked in on a Monday morning to have a portacath inserted
but woke up and decided that she just couldn’t do it. Picked up the
phone with tears streaming down her face and called the Mater in
Gladstone to tell them to cancel surgery for that day, she wouldn’t be
going ahead with chemo.Kiarra wanted to stay alive, she had been told about how the affects of chemo could destroy her body, she was overwhelmed and confused and had no idea what to do. Kiarra said ‘It would have been no more than five minutes later that my phone rang and it was Dr Schreiber. He said one sentence to me that I will never forget:

– “Kiarra, if you don’t have this treatment you will not be around to see your sons grow up”.

“They were harsh words” Kiarra says, “but my reality, and it was what
I needed to hear to get my head straight and make the right decision
which was to have conventional treatment as advised by my doctors.”
From that day on, I changed my focus from fear to positivity and I made
myself believe I would get through this and I would survive.Now move along nearly three years and I am feeling fantastic. I eat very healthy,
stay fit, and everyday I wake up and appreciate that I am still here and
living my life with my sons, Kiarra said.
Kiarra has been asked to be a ‘face of Relay’ for 2016 because she
survived a cancer diagnosis. Being diagnosed with grade 3 stage 3
cancer does unfortunately mean she has a chance of reoccurrence so she
does have some fear on her mind but chooses to forge ahead.
Kiarra said ‘

When I was asked to be one of the “Relay For Life” faces for
2016, I asked that it not just be me but my sons as well. They were by my side through it all and rode the long scary emotional journey with me the whole way. Without them I don’t think I would have coped.’

“I chose to do this is because there is so much hype out there
surrounding alternative treatment for cancer and it is so easy for
vulnerable cancer patients to be swayed. I want to promote the
conventional treatment the Cancer Council supports does work. I believe
with lots of research our amazing scientists and professors will find a
cure for cancer one day.

To be told you have cancer is the most terrifying ordeal anyone can endure and It’s a bit like childbirth, you just remember the good parts and not the bad painful parts. I remember the amazing support from my beautiful family and friends, the fundraising events that were organised to help me pay my medical bills, the never ending messages of good wishes and health from old friends, new friends and even strangers.Cancer makes you re-evaluate yourself and your life. Life is too short so I am forever telling friends and family now to not allow stress in your life. Make changes or choices to lead a healthier, more relaxed lifestyle and appreciate what you have every day.’