Float By The River the newest swim school in town. 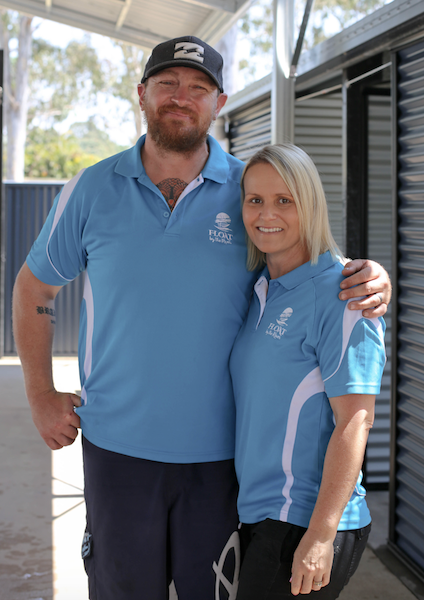 20 Oct Float By The River the newest swim school in town.

Posted at 13:07h in Community, Local, News by sales@gladstonenews.com.au 0 Comments

The newest swim school in town has a long local history. Kelly Gallagher, co-owner with husband Kye of Float By the River in Benaraby used to be a Waratah River Rat.

“My mum had me swimming by the age of two, and I just swam all the way through, with Waratah River Rats,” Kelly said.

“When I went to high school, I lost my dad when I was twelve, so it was just Mum. We lived down at Wurdong, and I was at school in town,” she said.

“Commuting back and forth to go to swimming training got really hard, so because I was at State High, it was really easy for me to just walk down the road to the pool.”

“That’s where I did my swim training at the Town Pool. We used to do eight k’s in the morning and eight in the afternoon,” she said.

Many long-term residents will remember Kelly’s swim coach: “I was trained by Marcus Ringuet,” she said. “He was the head-honcho swim coach back in the day.”

“I made the CQ team where we had to go to Rockhampton for trials and then I went on to compete at Chandler, where all the state titles are held, down in Brisbane,” she said.

About Float by the River’s unusual name, Kelly says it was the result of a brainstorm: We were just kind of throwing around some ideas, and we wanted something really catchy, so we thought “splash” or something like that, and then I said: “Well, we’re by the river,” and someone else said “float” and my husband said “Float by the River!” and I said “Sold!”

Although Float by the River has just commenced its first term of lessons, their small class sizes (maximum of 3 children) and a large pool mean the kids have a ball.

The pool is heated and undercover: “We’ve actually got a big shed over it, and it’s about 11.5 meters long which is a lot bigger than your average backyard pool.  It’s heated which makes it a lot more pleasant for the kids when they hop in,” she said.

And at Float by the River it’s unlikely your class will be cancelled if it rains: “Because it’s under cover, the rain doesn’t affect us.”

“We’re hoping by next year to put in a 20 by 6 metre pool in the front yard, and then we’ll be able to open it up to squad, water aerobics and for access and ability: for people with disabilities and people who’ve had injuries, knee reconstructions and things like that, so they can do pool-based rehabilitation,” Kelly said.

“People from Tannum, or Turkey Beach or Bororen, it’s really easy for people to come to us because we’re right on the highway,” Kelly said.

There is still plenty of availability for the coming term with Float By the River offering lessons six days a week, given by qualified coaches Kelly, her husband Kye and Shelly Jeppsen: “We do babies from six months all the way up to school age kids, to what we call “lappers” it’s just the level before squad.”

To book in for lessons, see Float by the River’s Facebook page: https://www.facebook.com/floatbytheriver/