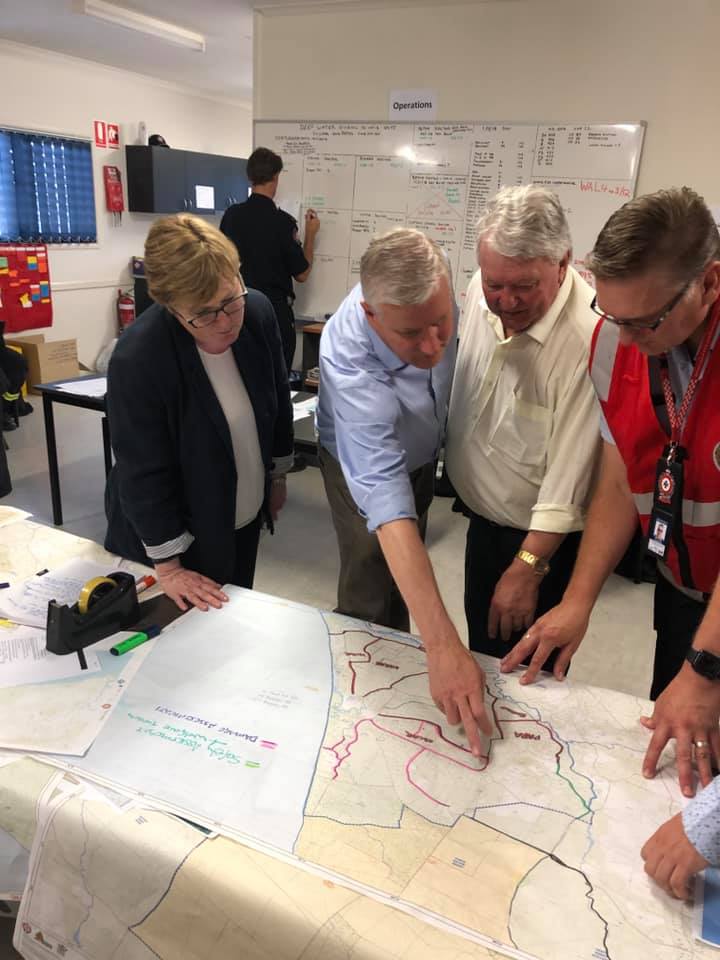 After a harrowing week of bushfires burning across the region, Member for Flynn, Ken O’Dowd returned from parliament in Canberra to support his electorate.  Taking special leave last week Ken and his team have been on the ground visiting the fire-affected communities.

“I am thankful for the tireless work of volunteer firefighters and other emergency personnel who have been battling the bushfires since last weekend,” Ken said.

On Saturday, Acting Prime Minister Michael McCormack, Assistant Minister for Home Affairs Senator Linda Reynolds, Senator Matthew Canavan and Ken visited the communities of Mount Larcom, Miriam Vale and the incident control centre at Agnes Water. Mr McCormack said that the visit allowed the group to see first-hand the devastation across Central Queensland. “We are here to listen and here to help,” he said.

Member for Flynn, Ken O’Dowd said he was tremendously proud of the community for rallying together at this time of crisis. Ken grew up in Mt Larcom and attended school in the town. He said the community was very appreciative of the tireless work of firefighters. “We have heard firsthand some miraculous stories of close calls with the Queensland fires – Mount Larcom narrowly escaping being razed thanks to the magnificent efforts of firefighters,” he said. “The community is very appreciative their town was saved.”

Ken has urged the community to stay safe during these extreme conditions by listening to authorities.

Assistance is being provided through the jointly funded Commonwealth-State Disaster Recovery Funding Arrangements (DRFA) and is in addition to the assistance already available for communities in Central Queensland.

Assistant Minister for Home Affairs Senator the Hon Linda Reynolds, who has responsibility for Commonwealth disaster assistance, said the bushfire situation in Central Queensland has had a significant impact on communities, including primary producers in the region.

“The Commonwealth and Queensland governments continue to work closely to support ongoing recovery efforts and identify where further assistance can be provided,” Assistant Minister Reynolds said.

Information on disaster assistance can be found on the Australian Government’s Disaster Assist website at www.disasterassist.gov.au.