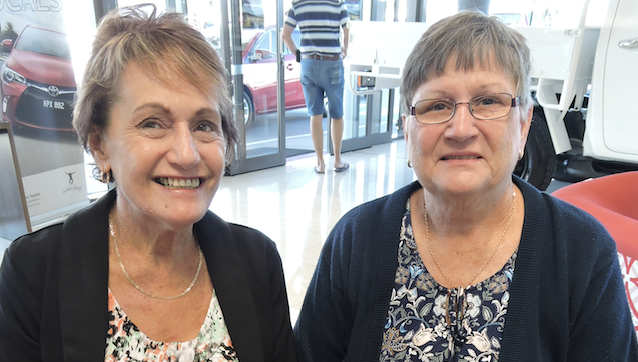 Technicians installed the screws for a number of Gladstone Seniors, who enjoyed morning tea and a complimentary car wash as part of the deal.

“We had a very busy morning,” Erin Robertson, organiser of the campaign said.

Number plate theft is often linked to vehicle theft, with stolen vehicles often going on to be linked to other serious crimes like armed robbery, stealing and traffic offenses, so local seniors were keen to take advantage of the offer of this extra level of security.

Seniors were invited to make a pledge for Road Safety Week to make our roads safer.

There was a lively discussion about excessive speed in and around residential areas and using mobile phones whilst driving, with police informing seniors of their work in promoting road safety and reducing the road toll by targeting those not obeying the road rules.

Very pleasing were the many local residents present who had held a drivers’ license for over 40 years and never been fined, as well as the many stories about their first cars and how driving has changed over the years.

The classic FJ Holden, the Ford Cobra, Minis and Ford Escorts were some of the sweet rides in which our seniors took to the roads, back in the day.

Also coinciding with Seniors Week, the state government has announced that they are making it easier for our older citizens to access their share of the $5.3 billion budgeted for concessions and rebates this financial year.

The Minister for Innovation, Science and the Digital Economy – and former Gladstone State High School English and Drama teacher –  Leeane Enoch said her department had partnered with the Office for Seniors to develop a shared application process to streamline access to concessions for people aged over 65.

“Under the Senior Concessions pilot – expected to run until the end of the year – it has never been easier for people aged 65 and over to access their concessions and rebates,” Ms Enoch said.

“It also means people don’t have to wait as long for approval on their rebate applications. We estimate the new service cuts the wait time from 20 or more days to as little as a day.”

“More than 1100 Queenslanders have used the new service, available since December 2016, which has also helped seniors and carers better understand what concessions are on offer,” Minister Enoch said.