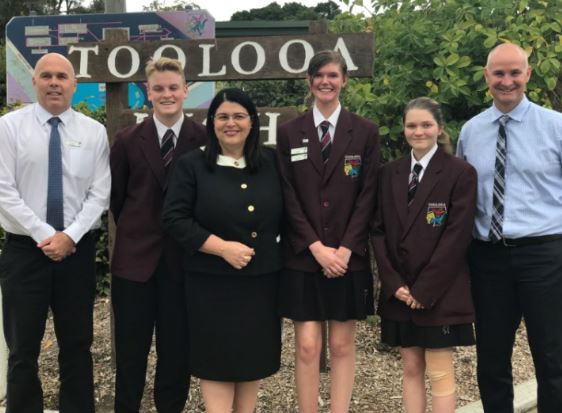 Toolooa’s Principal, Justin Harrison said the new building was needed to accommodate the first full cohort of students progressing from year seven’s inclusion in secondary schools, but it will be much more than just extra classrooms:

“Up top it’s going to be a multi-purpose music room with a number of break-out areas and that will lead into another four rooms where they’ll have collaborative spaces,” he said.

“One side will be used more for the Arts and the other will be more for the technology where they can design and build, using our 3D laser printers -so just a magic facility.”

“Underneath is great too, it’s undercover, there’s more seating areas for our kids out of the elements when it rains and out of the sun. It’s just going to be a really great facility

Mayor Matt Burnett, a former pupil of the school said the 1.7 million refurbishment of Toolooa’s hall complete with a new floor, weatherproofing, pull-down screens, storage areas and jumbo-fans –  would make form and assembly a far more comfortable experience now than in 1992 when he was a student. Principal Harrison who spent his early career at the school as a Phys Ed teacher echoed his sentiments.

Minister Grace also called in at Boyne Island State School, Rosella Park School and Calliope State School for what she called ‘a school infrastructure blitz’ of refurbished classrooms, halls and learning areas which she said supported 435 local jobs during construction.

The hall at Boyne Island State School got a $1.5 million extension and upgrade, delivering a new foyer, a stage and auditorium area, a music classroom, instrument storeroom, a change room, a storage room, and a shaded outdoor decking area.

At their final stop, just outside his electorate of Gladstone, in Calliope, Mr Butcher said the Palaszczuk Government’s investment in state school infrastructure had been a win for the local community.

“I know the new $7.1 million two-storey block at Calliope State School has been a particularly significant facility for the school and their focus on STEM education” Mr Butcher said.