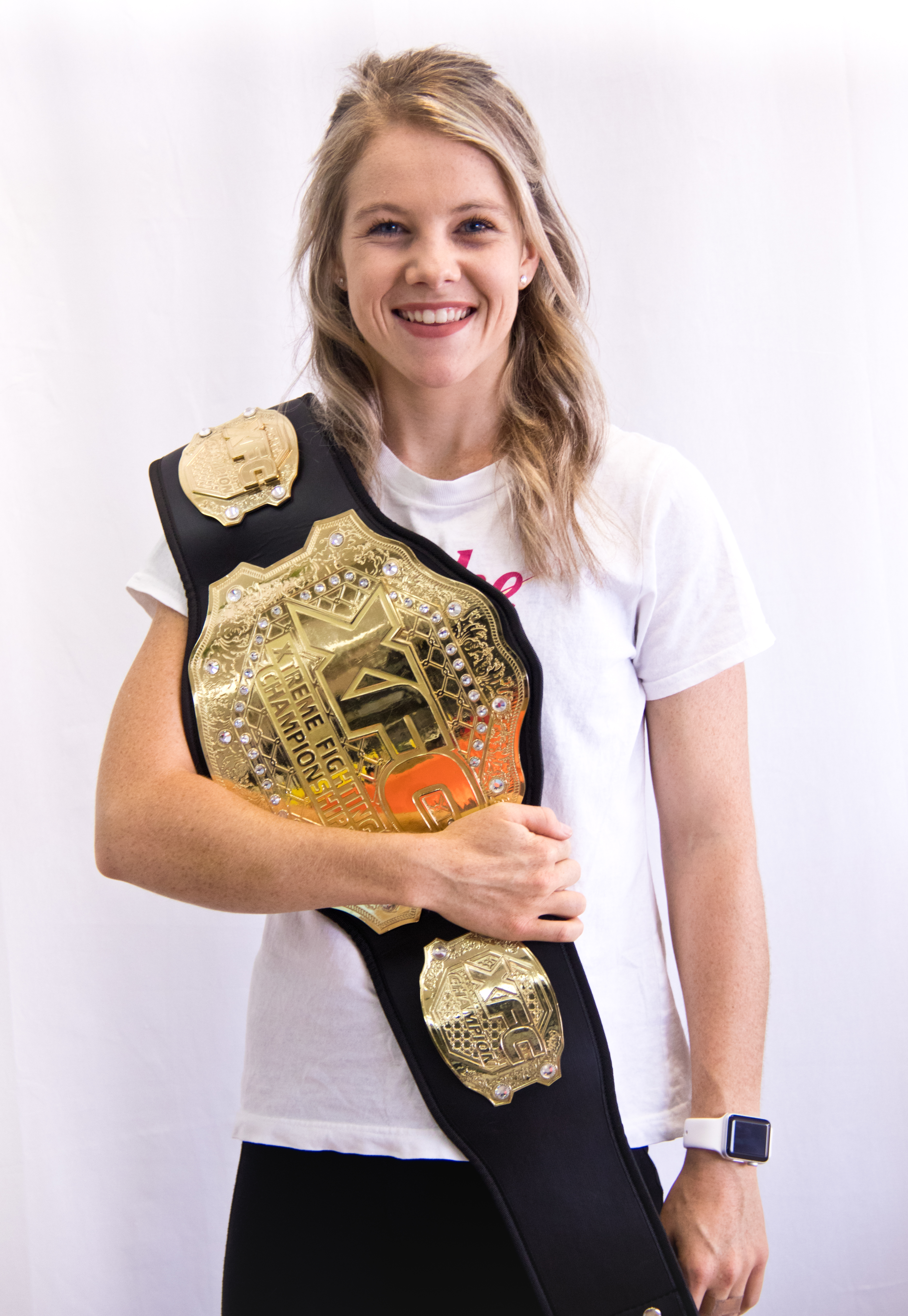 Picking on someone her own size, Kaela defeated the Sunshine Coast’s Brooke Kenrick in 5 X 5-minute rounds to claim the title for fighters weighing 47.5kg or less, in front of a 1000 strong crowd at the Mansfield Tavern in Brisbane.

“We were the main event as well. And that was the first ever female main event on XFC,” Kaela said when she dropped into the Gladstone News office to show us her amazing and very heavy, sparkly gold-and-diamante encrusted XFC Atom Weight title belt.

“They created this title for us, it’s the very first one. And I won it!”

Atom Weight is the weight class for fighters 47.6 kg and under. The petite blonde who stands 152 cm in her socks (five foot nothing in the old money) is eyeing opportunities in Asia:

“I don’t have my division in the UFC yet because I’m still too light, but all over Asia, they have that division in their bouts and they do have a lot of girls.”

In thrilling MMA events where the main rules are simple – no punches to the back of the head and no kicking, punching or kneeing your opponent when she’s down – Kaela is an up-and-comer and it’s the girls the punters come to see:

“You get as good a crowd for the girls as the boys, if not more,” Kaela said. “Everybody comes to watch the girls.”

“It’s actually gotten a lot bigger. You see now in the UFC, they have a lot more divisions for the girls, just recently on the weekend they had a girls’ fight in the straw-weight division, so one above mine,” Kaela said.

“It was Rose Namajunas and Joanna Jedrzejczyk, they’re pretty good.”

“You have the separate styles – you have your Muay Thai which is stand-up and your Brazilian Jiu-jitsu which is on the ground – but MMA brings them all together,” Kaela explains.

“You go into the cage, and you’ve got stand-up, clinching, take-downs, you go to the ground, and then you’ve also got punches on the ground as well.”

And even though to an outsider, MMA can look quite intimidating, our Tiger is fearless:

“I don’t get scared about getting hurt, but I get nervous about losing, or performing badly and disappointing people,” she said.

“You just get excited. I’ve been doing it for a while now and it’s nerves, definitely, but good nerves.”

Gladstone born and bred and a former student at Toolooa State High School, Kaela, 20, trained with Rob McIntyre at Gladstone Martial Arts Academy at Barney Point before moving to the Gold Coast at the end of 2016 to be closer to opportunities in the MMA-circuit.

McIntyre, who Kaela said is hugely proud of her success, is also responsible for her ferocious nickname:

“It was because I played golf. So yeah, Tiger Woods,” Kaela said.

“I played a bit of junior golf and I was late to training or something because I had practice, so Rob says, “Oh here comes Tiger!” and it kind of stuck.”

“I still like golf, but more for a casual social game now,” she said.