Good to know these weapons and drugs have been seized 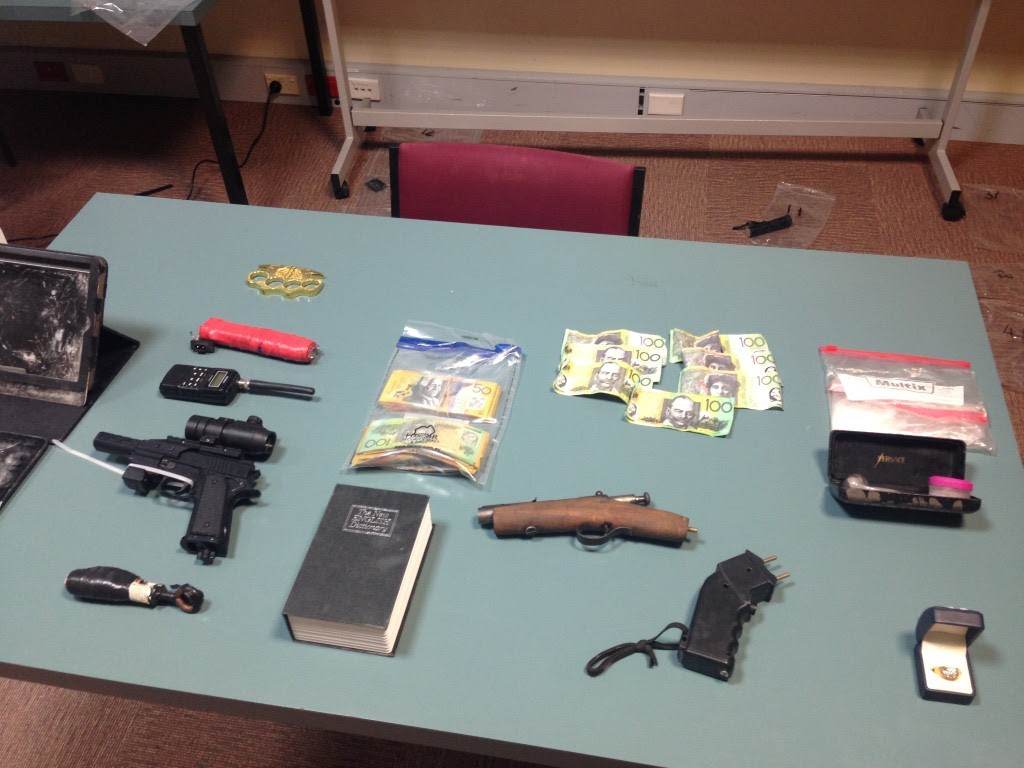 Police have arrested 12 people and seized ice, cannabis, weapons and cash as part of an operation targeting the distribution of ice in the Gladstone and Tannum Sands area.

Operation North Oxbow commenced in June 2015 by officers from Gladstone CIB, Organised Crime Investigation Unit (State Crime Command) and Tannum Sands police. The operation primarily focused on a syndicate involved in the distribution of ice within the local area.

Over the last two days police from the Organised Crime Investigation Unit in partnership with police from Gladstone, Rockhampton, Tannum Sands and Calliope stations and officers from the Australian Border Force executed search warrants in and around the Gladstone and Tannum Sands area.

In total police executed 12 search warrants, resulting in the arrest of 12 persons on 48 drug related charges (five of which were charged with trafficking in Methamphetamine and Cannabis). One person was also charged with supplying drugs to a minor and using a carriage service to procure a minor.

Police also located 12 firearms, four tasers, 57 grams of Ice, 100 grams of Cannabis, 34 Cannabis plants, $12,390 in cash, $700 in counterfeit cash and a large amount of property suspected of being stolen.

During the course of the operation a number of tactical activities were undertaken which resulted in the arrest of a number of persons and the detection of further drugs and property.

“The targeting of those individuals who are involved in the sale of Ice into our communities remains one of our highest priorities. Our officers work hand in hand with regional police. This is a battle we must continue to fight to ensure the protection of our communities,” Detective Superintendent Jon Wacker of the Drug and Serious Crime Group stated.

“The closure of this Operation North Oxbow should send a strong message to those that want to pursue a life of drug trafficking. It remains only a matter of time before you are located, arrested and your proceeds of crime seized,” Detective Inspector Lance Vercoe of the Organised Crime Investigation Unit said.

One person has been remanded in custody with the other persons charged appearing in the Gladstone Magistrates Court on March 15.

Crime Stoppers is a registered charity and community volunteer organisation working in partnership with the Queensland Police Service.

For all non-urgent police reporting or general police inquiries contact Policelink on 131 444 orPolicelink.qld.gov.au 24hrs a day.