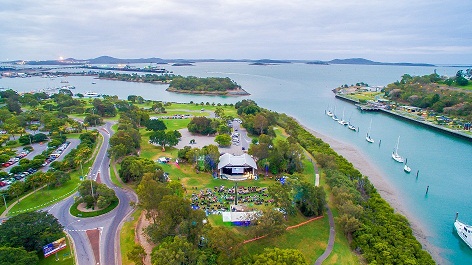 The Capricorn Film Festival is on once again at the end of this month (28th and 29th October), and we have the exclusive on the guest judges that will be visiting Gladstone to lend their expertise to the event.

The annual #capfilmfest gives residents the chance to support filmmakers from around the region and from all over the world. It also allows for local filmmakers, seasoned and beginner, to enter their short films into the competition.

This year, presenter and host for Saturday Disney and Network Seven, Teigan Nash will be the MC for the festival. Guest judges for the weekend include Charlie Clausen and Gemma Lee, Mark and Lizzi Morrissey, Benson Jack Anthony and Melina Vidler.

Charlie Clausen is best known for his role as Jake Harrison on ‘McLeod’s Daughters’, as well as roles on ‘Blue Heelers’ and most recently ‘Home and Away’. Charlie’s wife, Gemma Lee, is a director and filmmaker. Her latest short film, ‘The Wake’, was screened  at the Tribeca Film Festival.

Mark and Lizzi Morrisey will also be guest judges at the festival. Being talent agents and managers of their company, Morrisey Management in Sydney, they have a great eye for talent that will be valuable to the festival.

Benson Jack Anthony is an Australian actor, best known for ‘EMO the Musical’ which was released in August this year and TV drama ‘800 Words’. Benson’s ‘800 Words’ co-star, Melina Vidler will also be joining him in Gladstone as a guest judge.

The Capricorn Film Festival is on the 28th and 29th of this month, starting at 5pm on the Friday afternoon and 2pm on the Saturday. We look forward to the guest judges coming to Gladstone and seeing the great local talent that we have!