Juice up the car at Miriam Vale 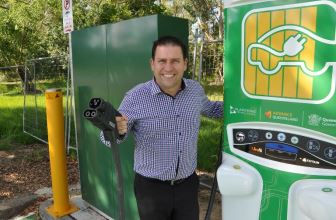 09 Jan Juice up the car at Miriam Vale

Miriam Vale’s growing reputation as the ideal travel rest stop has been further consolidated with the introduction of an electric vehicle charging station on Blomfield Street.

The charging station, funded, installed and operated by Ergon Energy, is part of the
Queensland Government’s super electric highway initiative.

The station was installed in Miriam Vale by Economic Development Queensland as part of its aim to roll out charging stations in various centres along the Queensland coast from Brisbane to Cairns.

Gladstone Region Mayor Matt Burnett said the installation of the charging station would prove a boon for Miriam Vale businesses.

“With electric cars set to become more numerous in the near future, there will be even more travellers stopping in Miriam Vale, which is great for local business,” Gladstone Region Mayor Matt Burnett said.

Miriam Vale’s location midway between other charging station sites in Rockhampton and Childers and its surplus electricity capacity makes it the ideal place for the charging station which is located opposite Alf Larson/Lions Park.

Analysis conducted by Energy Supply Association of Australia has indicated that there could be almost one million electric and natural gas vehicles in Australia by 2025.