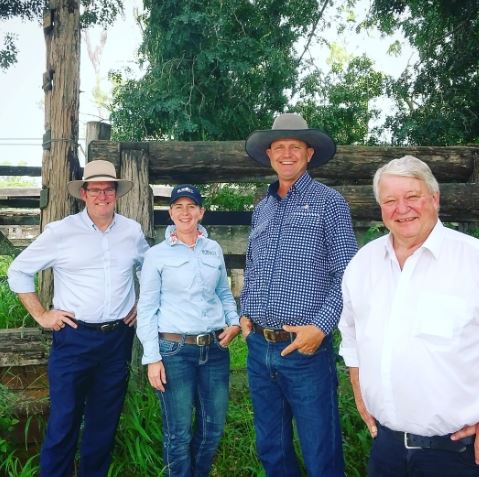 Last Wednesday I was joined by John McVeigh, Minister for Regional Development, Territories and Local Government to present funding commitments for some of the southern reaches of my electorate of Flynn.

John and I had the pleasure of being joined by Lance and Stephanie Whitaker from Burnett Livestock and Realty. Lance and Stephanie are from Biggenden and were successful in their application under the Australian Government’s Regional Jobs and Investment Packages.

Burnett Livestock and Realty is a livestock and property sales business based in Biggenden in the North Burnett. It owns and operates the Biggenden Saleyards. It is a family owned company that prides itself on being responsive to clients’ and industry needs. The company conducts fortnightly cattle sales with three special cattle sales also scheduled through the year. In 2017 approximately 44 000 head of cattle were sold through the Biggenden Saleyards.

Biggenden Saleyards are a major livestock exchange for the Wide Bay Burnett region, with this project underpinning the future of the region’s cattle industry.    The redevelopment of the Biggenden Saleyards, incorporating redesigned layout, 384 selling and 61 holding pens, new weighbridge, overhead walkways, buyers laneways, double and single deck loading ramps and new drafting facilities. The redevelopment of the saleyards will increase sale day capacity by 43{7a2eb471754f58cbf59baa93ee81dc7b74d186cb2e306188f39c85ba863dbab8} to meet increasing demand, and bring about significant improvements in animal welfare, risk management and WHS. The project will create 34.5 FTE jobs during construction and additional ongoing full-time employment once completed.

Lance and Stephanie are exactly the kind of entrepreneurial, agricultural business we want to support as it is operations like the Biggenden Saleyards which underpin so many regional communities and townships.  Congratulations Stephanie and Lance and look forward to seeing the works get underway in the near future.