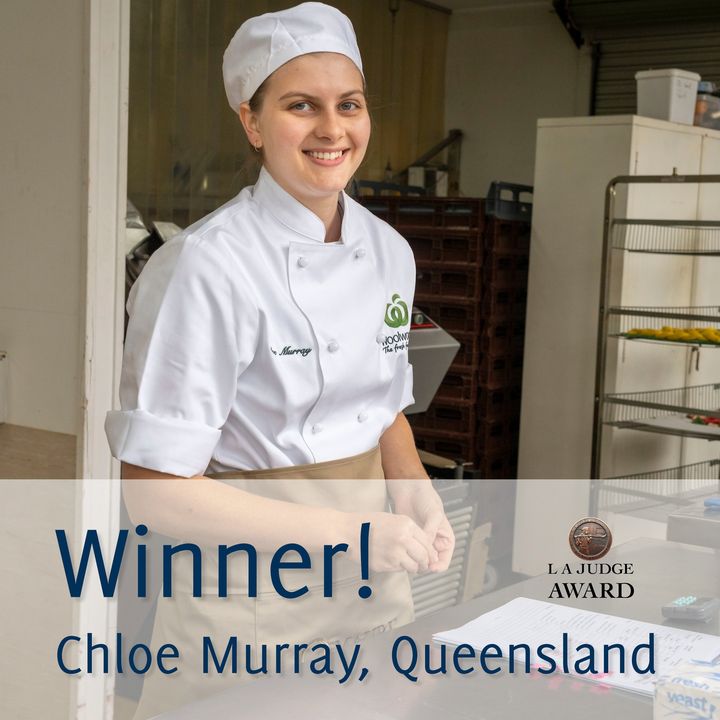 Chloe Murray of Kirkwood Woolworths competed in the nation-wide competition earlier in May.

Chloe, who started her Cert III Bread Baking Apprenticeship in October of 2020, said she always knew she wanted to work with food.

“I’ve been at Kirkwood Woolworths going on eight years now, and saw the apprenticeship program as a great opportunity to start my career in food. Woolworths supply the apprenticeship, and it was an awesome chance for me to get involved with, and also for the growth of the baking industry as a whole,” said Chloe.

The LA Judge Award consists of an intense three-day competition in Sydney. The competition was established in 1967 by the Bread Research Institute of Australia (now known as AEGIC Sydney) as a way of celebrating young bakers.

“We had to present speeches about ourselves and a question that was given to us at the competition. We also had to complete theory papers about production planning, food safety, product costing, bread production, wheat technology, bread ingredients and flour milling/quality. The biggest thing we had to do was the practical baking exercise. This task was extremely challenging because we had to use equipment we’ve never used before, like an oshikiri and a tweedy mixer. It also had to be run on a time schedule, which is challenging when you have never made this production before.”

“The LA Judge Competition was extremely intense but it was also a lot of fun. Every day was fully packed with tasks for me and the other contestants to complete. I was extremely nervous when I arrived in Sydney but when I met the other contestants I calmed down a little bit. They were amazing, they all embodied what the contest was looking for, which was the future leaders in the baking industry. I really had no clue who was going to end up winning.”

“The best part of my job right now is getting to go to my training at BITA to learn as much as I can about my trade.”

As part of her prize, Chloe will spend a full week in Belgium on an -all-expenses-paid trip. While she’s there, she will get to visit the headquarters of the baking and ingredients company Puratos. There, she will take part in training and bakery demonstrations.

“When I go to Belgium, I get to see the Puratos headquarters and take part in training and bakery demonstrations. I also get to see their sourdough library which I’m really excited about. I’m also extremely eager to see the Bocolade Chocolate Centre and try what the best chocolate in the world is supposed to taste like.”