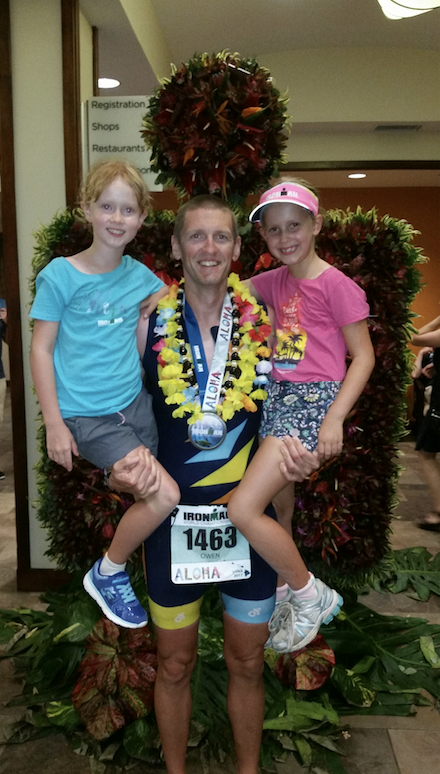 Local triathlete Owen Perrott is back in Gladstone after completing the “world’s toughest one-day sporting event” the Hawaiian Ironman or Kona Race in 11 hours and 53 minutes.

Owen won his qualifying slot ‘wild-card’ entry to the by qualification only World Championship event as one of the top performers in his age group category in Ironman Australia, held in Sydney in May of this year.

Training with Ryan McLoughlin the coach behind 3D Coaching Triathlon based at Western Suburbs pool, Owen trained six days a week for up to fifteen hours, in preparation for the race.

Over 2200 competitors took part in the triathlon held on the ‘big island’ of Hawaii with Australia fielding the 2nd largest contingent after the USA. Owen managed a creditable 1452nd place.

“On the day of the event when you’re running, you’ve got your name written on you and everyone is cheering you on, there are hundreds of total strangers calling out your name,” Owen said.  “It’s a tough event. They call it the world’s toughest one-day sporting event and it is tough, it was a lot tougher than when I did the same distances in Australia.

Along the Kona Coast, black lava rock dominates the panorama, and athletes battle the “ho’omumuku” crosswinds of 45 mph, 95-degree temperatures and a scorching sun.

“The bike leg is straight out across the fields of lava and there’s no protection at all so you get hammered by the wind most of the way and that makes it quite tough,” he said.

“It’s physically tough and mentally tough having to ride 180 km with the wind blowing at you from all directions, and that makes it quite difficult. Then you still have to run a full marathon on top of that,” Owen said. 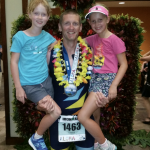 Owen after completing the Kona Race with his two biggest fans… 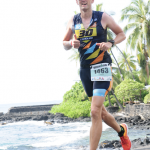 Still smiling during the 42km run 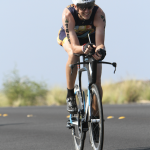 Cycling 180km across a field of lava is just one leg of the Hawaii Ironman. 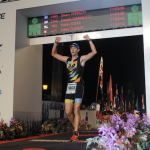