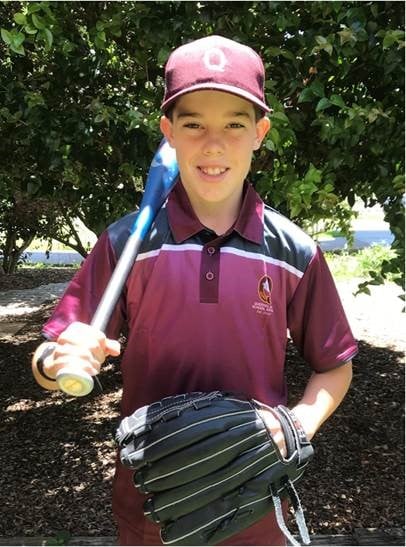 Max, who grew up watching his brothers play softball and was bat boy for most of their teams, has been playing softball since the age of four.

“I love pitching, because I got to watch some of the best pitchers play at some of the tournaments my brothers went away for,” the Year 6 student said.

Selected to play for Capricornia School Sport in 2020, Max said he was very excited and happy to be selected for the Queensland team as it was one of his dreams.

“I had to do a lot of driving to Rockhampton for training, and at home I had to keep practicing all the time,” he said.

Because the State Titles were postponed this year due to COVID19 there won’t be a National Championship either, but that won’t stop Max, who said he was planning on training a lot.

“I want to try and make the team next year, and hopefully go away and play in the Nationals,” he said.

Matthew Harrison, who has coached Max in the Capricornia 10-12 Years Boys Softball Team for the past two years said he was an “integral part of our championship winning team this year, pitching us to victory”.

“His work ethic is second to none, travelling up to Rockhampton weekly to compete,” he said.

“Max has a command from the pitching circle, well beyond his years and at only age 11.

The Capricornia School Sport Board is responsible for the administration and implementation of school sport in the Central Queensland Region.

Capricornia School Sport participates in 22 different sports at a state level and boasts a total of 71 representative teams.