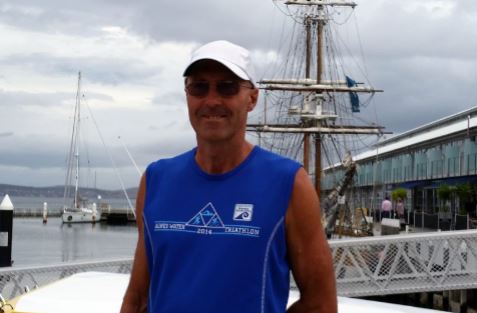 Modesty characterises many, if not all, of our region’s baton bearers, with 1770 resident, Chris Palfrey, surprised to be selected for such an exclusive crew:

“I had no idea so few people had been chosen to do it, so it was a bit of a shock actually,” he said.

“I really don’t think I’ve done anything more special than anyone else in the community, but anyhow I’ve just got the nod.”

Chris has turned his passion for fitness, particularly triathlons, running and cycling, into greatly anticipated community events for Agnes Water and 1770:

“This is a small place so if you want things to happen you have to pitch in and do them yourself, that’s my story in a nutshell.”

He is on the committee for the annual Agnes Water triathlon, which this year will take place on the 30th of September.

“It’s at Agnes, the transition is at the new Tom Jeffrey Park. It’s a fantastic little event, the swim’s right off the beach there, and the bike leg goes out to the Sunrise estate and the run is just around Agnes itself, it’s a good little event.”

Chris is also currently organising the first ever 1770 fun run, which will be held in conjunction with the 1770 Festival on 27 May 2018. Festival organisers have secured full road closures, it will be professionally managed, and most of all, fun.

“People can run, walk and talk, walk their dogs, walk with their children, push prams, whatever. It is meant to be a whole of community event,” said Chris.

It is a great course, going from the SES grounds to Cook’s monument and return. Distance is 5.7 km or a shorter 3 km course for those wanting a more leisurely morning.

Entries won’t open for about a week, but for the early birds, here is the link with some more information:

Chris said despite carrying the baton, he won’t be attending the Games at all: “I’m a small-town person. The Gold Coast, I could handle for a couple of days, normally speaking, but when the Games are on it sounds like my idea of Hell.  I’ll watch it on TV,” he said.