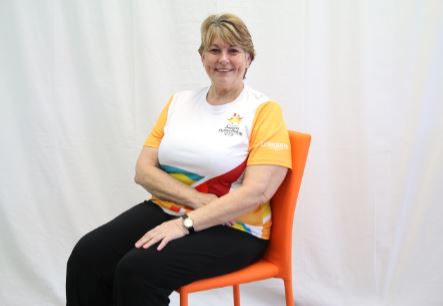 Runner number nine in the Gladstone leg of the Queen’s Baton Relay is Debbie Knust, and she couldn’t be more happy about it.

“I am so proud,” she said. “I just couldn’t believe it! It was my work colleagues at Disability Services Queensland who nominated me, which is just so lovely of them.”

Moving to Gladstone from Brisbane in 2009 to support her son and daughter-in-law who had just had their first child, Debbie soon found out that access to metro-city sporting opportunities for people with a disability were not available for her younger son, Adam.

“Adam and I were heavily involved with Special Olympics in Brisbane and initially I just wanted to find out if there was any interest here, and that’s how I started it up,” she said.

This year eleven local athletes will make their way to Adelaide to the Special Olympics National Games, representing our region in soccer, basketball, swimming and equestrian sports, in one of our largest delegations ever.

In another huge honour, Debbie has been selected as the Assistant Head of Delegation for both the National Games in Adelaide as well as for the World Games in Abu Dhabi.

She’s thrilled at how the preparation for the National Games is going:

“With the soccer athletes, we’ve been arranging some friendly games with Clinton Football Club so they’ve been marvellous,” she said.

“They can do all the training, but it’s the match play that they need; to that end, all of the Special Olympics soccer teams from Queensland are getting together in Samford this weekend, to help all the Queensland National Games athletes get match-fit for Adelaide as well,” she said.