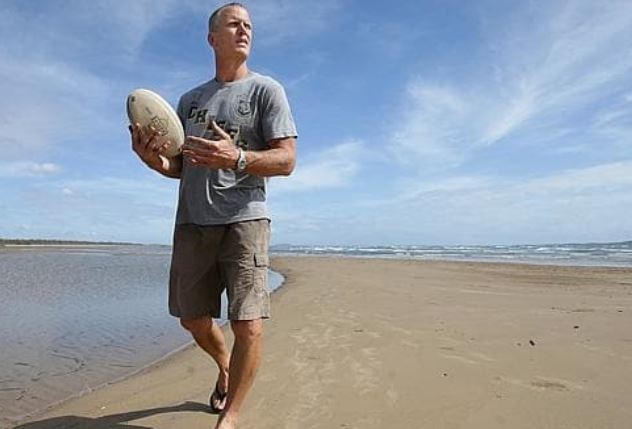 One of our more famous baton bearers, local league legend, Gary Larson was secretly nominated for the Queen’s Baton Relay, not by a rabid North Sydney Bears fan, but by his loving wife Kate…

“I was secretly nominated by my wife who replied to the call-out for baton bearers. I don’t know when she did, but she’s the one who did it. She’s done it behind my back, and it was a very nice surprise,”

“She wrote a letter outlining who I am, what I’ve done, and where I come from – and that is the Port Curtis area, Miriam Vale born and bred,” Gary said.

As most locals, certainly those in Miriam Vale would be aware, Gary represented Australia internationally, and Queensland in State of Origin, playing most of his club football with the North Sydney Bears before finishing his career with a brief stint at the Parramatta Eels.

As a player, he became known for his reliability due to his staggering workload in matches.

Larson’s breakout season was 1991. That year, in a team with players such as Phil Blake, David Fairleigh, Mario Fenech, Greg Florimo, Peter Jackson, Les Kiss, Billy Moore, and goal kicking sensation Daryl Halligan, his efforts were rewarded with State of Origin selection for Queensland, as well as helping Norths to the finals for the first time since 1982.

Larson played his first game for Queensland in Game 1 of the 1991 State of Origin series when he was chosen at lock forward for the game at Lang Park in Brisbane.

He would go on to claim the record for the most consecutive State of Origin appearances with 24 for Qld, from his first game in Game 1 of the 1991 series until his final match, Game 3 of the 1998 series. This record would only be equalled by Johnathon Thurston in 2012.

Despite all that, he still thinks he might drop the pill: “I’m not running, no way, I’m walking. I don’t want to drop that baton,” he said.  “Little Ruby Lawler warned me about that. Neither of us want to be the one that drops it.”

“I’m walking from Library Square, down to the Gladstone Yacht Club. It’s a fair step, I’ve been told it’s an 800 m stroll,” he said.

“I’m sure there are lots more famous local people who have walked or run the baton before me. I’m pretty sure the main reason I got chosen is my history in the sport of Rugby League, obviously that was good enough for the Commonwealth Games committee,” he said.

“And now I’m a shift-worker at the Gladstone Ports Corporation. I shift that black stuff around, the coal. It’s a great job, I love it out there,” he said.