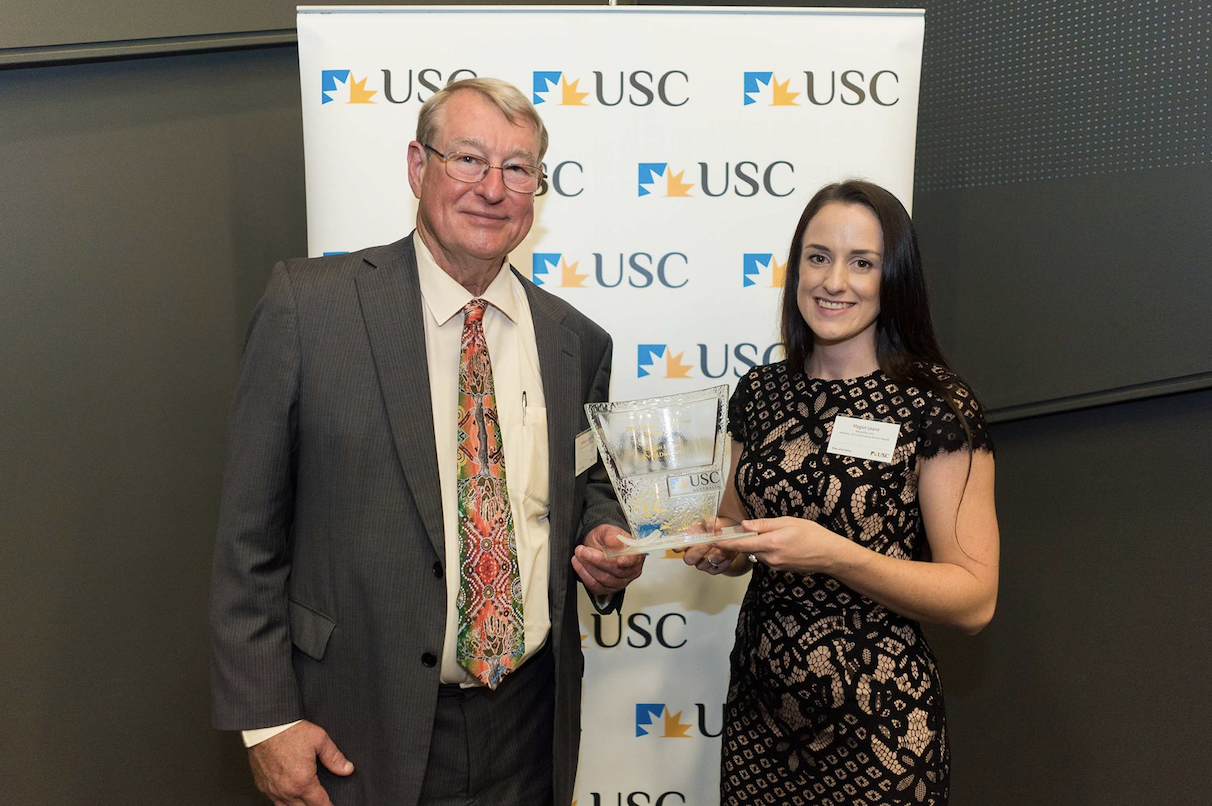 Megan Leane, dietitian accepts her “Rising Star” award for Outstanding alumni from the University of the Sunshine Coast from Vice-Chancellor, Professor Greg Hill.

Megan Leane has been awarded the University of the Sunshine Coast’s (USC) Outstanding Alumnus “Rising Star” Award for 2017.

The award recognizes graduates of USC who go ‘above and beyond’ the call of their profession. It is open to graduates under the age of 35 who graduated less than five years ago.

The local dietitian, who graduated in 2012 came to the attention of the judging committee when she won the Young Business Leader category of the Gladstone Best in Business Awards last year.

After graduation, Megan researched locations that were underserviced in her field and chose Gladstone to establish herself as the only ‘practising private dietitian’ in the region:

“When I graduated from University I was looking for places that had a need for my services and for my professional skills and I identified Gladstone and I decided to move here because of that,” she said.

“Previously there were no private dietitians in town, and people had to travel to Rocky or Bundy to actually access these services. And when I say private dietitian I mean Medicare and DVA as well. Obviously, we have the hospital but the waiting lists were really long and it was too much strain on the public health system.”

“I’m a regional kid myself, I come from regional New South Wales and I know what it’s like to have to take days off school to go to the dentist or to have an optometry appointment and the disruption to your general life. It’s an inequality.”

Over the past four years, Megan’s clinic has grown from one day a week to a full-time practice. She estimates that she has volunteered around 450 hours in the Gladstone community through a range of activities including school workshops, canteen menu development, sporting group support, free healthy breakfasts, cooking classes, and mentoring of new graduate dietitians.

“Between schools and sporting clubs and community groups, I now sponsor a couple of athletes and moving forward I will be a scholarship provider for Gladstone residents who need to travel to study,” Ms Leane said.

“When I was at Uni I received scholarships myself so I know what kind of a difference it really makes. Once again, I want to help redress that regional inequality we’re seeing, that you’re unable to access services whether it’s education or health.”