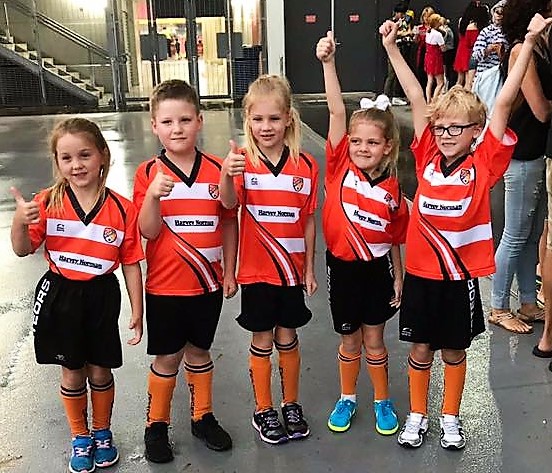 Five Meteors’ Football Club Aldi MiniRoo’s travelled to Brisbane last week to represent their club and play during half time of an international soccer match.

The Meteors’ Football Club have been participating in the Aldi MiniRoo ‘Kick Off’ program in 2018.  The exclusive invitation from Football Queensland invited Meteors’ players to attend the Australian Caltex Socceroos vs Korea Republic football game on November 17th

Donna McConvlle, secretary of the Meteors Football Club said the children were thrilled with the opportunity and had a great time travelling to Brisbane and competing against another team from the Sunshine Coast. Donna said a highlight of the trip was some extra special news delivered on the team’s arrival to the stadium. “On arrival to the stadium, Football Queensland advised that one of our plays, Sophie McConville, had been chosen to present the match ball to the referees at the start of the game,” Donna explained. “Sophie took it all in her stride, and said ‘have a good game’ while she shook hands with the referees, which made them have a little chuckle”

Donna said that Sophie and the team then went on to play a game at half time. The children’s Coach Hannah and Mark Delaney from CQ Mariners were on hand to guide the soccer stars through their special match. “The smile on the children’s faces when they came off the field was brilliant to see,” Donna said. The Aldi MiniRoo program is the official FFA home of football for boys and girls of all abilities, aged between 4 – 11 years old. ALDI MiniRoos aims to introduce Australia’s biggest junior participation sport to newcomers in an inclusive way. Donna said the Mini Roo program had been delivered at the Metoers Club this year and next season they have plans to extend the program and increase team numbers for 2019.

Donna said the Gladstone based Meteors team had enjoyed a fantastic football season this year. Both ladies teams had won the finals and the men’s team had finished their in their competition. “The Club is always on the lookout for new coaches, members and sponsors,” Donna explained. “The club will be holding an informal meeting on Friday November 30th to discuss plans for next season and elect any new coaches and committee members. We welcome anyone who would be interested in taking a role or volunteering,” she added.