Not in our Town 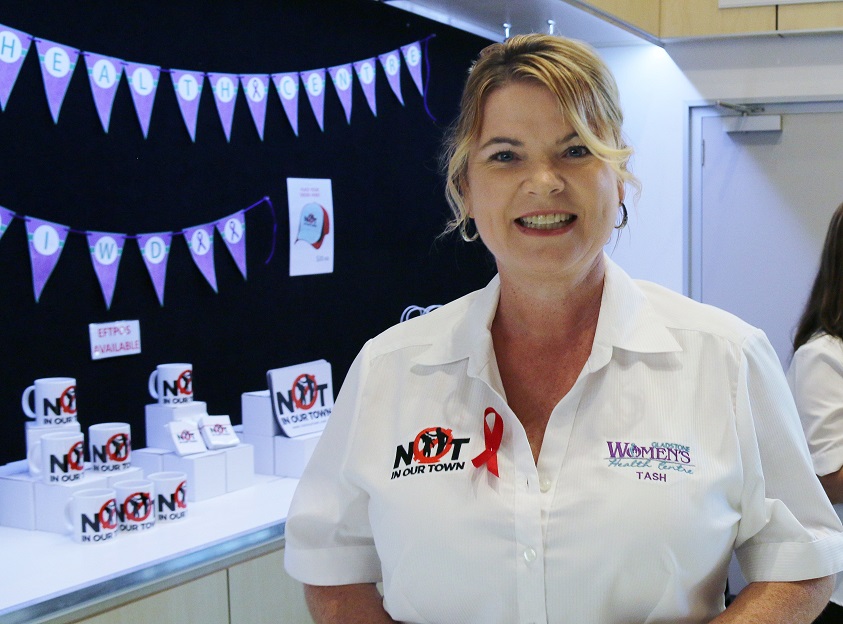 Posted at 04:43h in Community, News by Karina 0 Comments

Last night, on International Women’s Day, it was the perfect occasion to launch the Not In Our Town campaign

When it comes to domestic violence Gladstone has a simple and clear message for perpetrators: not in our town.

’79 WOMEN DIED DUE TO VIOLENCE AGAINST WOMEN IN 2015, 9 WOMEN HAVE DIED IN THE PAST 3 MONTHS. DV IS A NATIONAL DISGRACE.’

Gladstone MP, Glenn Butcher, had a strong message on Domestic Violence and spoke about the need for men to call each other out and stand together against unacceptable behaviour. Glenn spoke of his wife, mother, daughter and two female staff members, Jill and Tara, being strong influences in his life and one of the many reasons why he was so passionate to get behind the campaign.

Glenn Butcher then went on to give an emotional and heartfelt introduction to a local survivor of domestic violence who addressed the audience with her story.

It was a brilliant, brave and moving speech that shared many corners of how DV affects the victim and families. She bravely agreed to share her story for the first time in public to assist getting the message out that domestic violence is not okay. A key part of the message was that this type of behaviour is not always just physical.  It is also emotional and psychological and is a debilitating situation that removes confidence, self worth and embeds guilt and blame on the victim.

Gladstone Women’s Health Centre manager, Tash Fee said they created the campaign so this important issue would be in the spotlight and no longer kept behind closed doors.

‘Gladstone has a strong message, ‘Not in our Town’ and Tash handed the baton to the Gladstone community to take and ‘own’ this campaign because it belongs to all of us. of

The new website launched notinourtown.com.au states:  THE SOLUTION is not in spending more money on resources and picking up the pieces when it’s too late. The solution is for the people of OUR TOWN to be the watchdogs of the standards of our community

WHEN YOU SPREAD THE WORD of NOT IN OUR TOWN, you are spreading hope and giving strength to the victims and putting perpetrators on notice. The more you spread the word, the stronger the message becomes until it’s a household name.

QGC HAVE SPONSORED THIS CAMPAIGN AND LORNA SAID ‘IT’S TIME TO BREAK THE SILENCE ON DOMESTIC AND FAMILY ABUSEAND WE ARE VERY PROUD TO PARTNER WITH GLADSTONE WOMEN’S HEALTH CENTRE TO DELIVER THIS MESSAGE’.

Capricornia District police have also been a key part of the campaign.

“Billboards, all the way down to cups and mugs and hats and stickers, have been organized”, Ms Fee said.

“It’s really important that those visual prompts are constantly there to remind people that we won’t tolerate domestic violence in Gladstone.”

Domestic violence in Australia has been widely documented in recent times and Ms Fee said Gladstone was not immune to the issue.

In fear or anxious around your partner?

Do you know someone who is at risk of abuse or violence of any kind?

Do you want to help stamp out domestic violence in our town?

Contact the following resources for help, or more information: