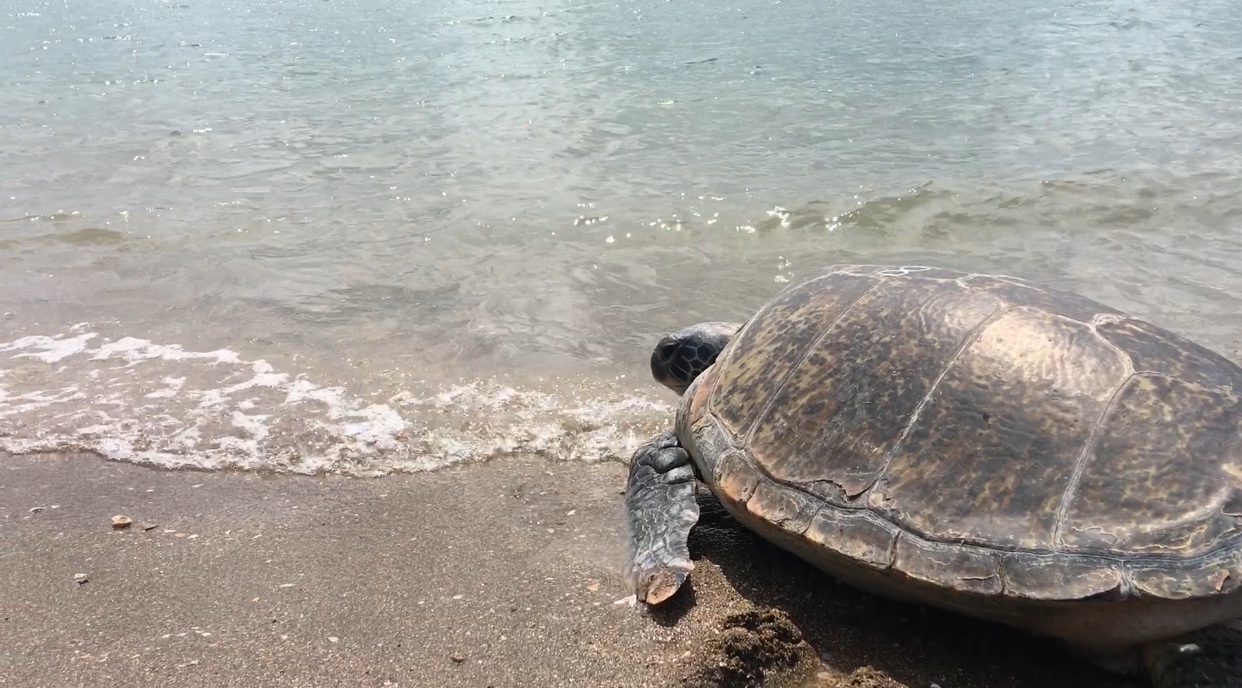 Dori, the Green Sea Turtle has called the Quoin Island Turtle Rehabilitation Centre (QITRC) home for the past two years. After her very long rehabilitation, Dori was released back into the ocean from Quoin Island recently. Her story of survival is remarkable and worth sharing to increase awareness of the plight of these beautiful ocean creatures. Dori holds a special place in the hearts of the centre’s volunteers and Quoin Island owner Bob McCosker, for not only her length of stay but also her courageous battle.

Dori was collected from Wiggins Island Coal Terminal on May 6th 2016 and initially presented with breathing troubles. Upon her arrival at Quoin Island, Dori weighed just 75kg. She was extremely underweight and a very sick turtle.  After many thorough investigations, Dori was found to have a mussel shell lodged in her trachea. This was surgically removed. Bob McCosker, the owner of Quoin Island, said that following her surgery she was still struggling to gain weight and stay healthy. It was then that Dori was found to be battling a serious infection, caused by a stab wound in her shell. The wound was unable to heal due to a build-up of dirt etc. It took six months of constantly cleaning the wound for it to heal and since then Dori has been nursed back to peak condition.  Bob said that although Dori was picked up locally there is no way of knowing where her injuries occurred and it was likely she was floating around for at least a few months before she was rescued. Dori left Quoin Island weighing in at a healthy 140kgs and a much healthier turtle than when she arrived.

The Quoin Island Turtle Rehabilitation Centre (QITRC) is dedicated to the rescue, rehabilitation and release of ill and injured sea turtles. Since opening the QITRC has rehabilitated over 200 turtles. 95% of turtles admitted to the centre are unable to swim or dive, so they must be able to do both in order to be released back into the wild. QITRC is licenced to rehabilitate up to ten marine turtles at any one time. The centre is 100 per cent locally owned and operated. A large portion of centre duties are covered by a team of trained community volunteers. Bob said that support from industry, especially Conoco Phillips downstream operator of Australia Pacific LNG through their community benefit fund has been instrumental in the centre’s success.

Bob told Gladstone News that water pollution is of significant threat to marine life. “In one cyclone event, we had over a metre of water fall in a few days. The bulk of that water, it cleans all our footpaths, our backyards and our gullies and farms. It cleans them up beautifully, but every drop of that water and every one of those chemicals, every cigarette butt, every piece of plastic and rubbish that is lying around all ends up in the ocean.  When you have an influx of a lot of fresh water close to coastal areas and around the river mouths that then kills off the seagrasses,” Bob said. He believes education about where rubbish ends up and the impact this has on our environment is key to minimising the effect on marine creatures into the future.

Along with pollution, Bob explained that the single biggest threat to these animals in our local area is recreational fisherman.  The centre often receives turtles that have been injured by boat strike or caught up in fishing line that hasn’t been disposed of responsibly or they get caught up in crab pot lines that are not getting checked frequently. Bob also explained that turtles, like dugongs, feed on seagrasses and that all the chemicals and rubbish that wash into the oceans after rain also causes problems. “If we could eradicate some of those problems then that would help,” he added.  “Just being aware of turtles can help prevent boat-strike.”

There are currently nine turtles in rehabilitation on Quoin Island, if you find an injured turtle please call 1300 ANIMAL or the QITRC on 0408 431 304