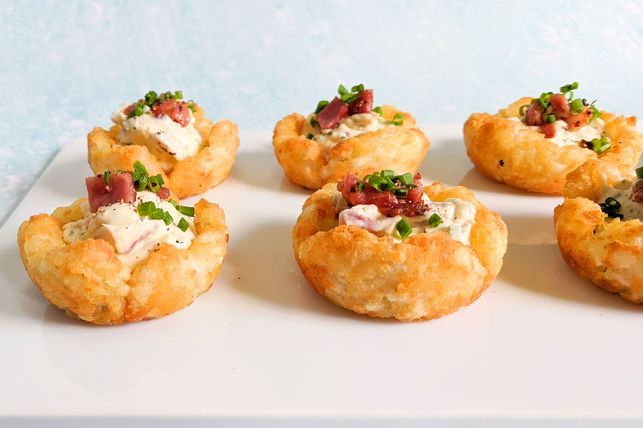 Meanwhile, heat oil in a medium frying pan over medium-high heat. Cook bacon, stirring often, for 5 minutes or until golden and crisp. Set aside.

Remove trays from oven. Use the end of a wooden rolling pin or large spoon to press the gems down and up sides to create potato gem cups. Bake for 20 minutes or until golden and crisp. Set aside, in pans, to cool slightly before transferring to a serving platter to cool completely.

Place the cream cheese, sour cream, cheddar, lemon juice, half the bacon and two-thirds of the chives in a medium bowl. Season with pepper. Stir to combine. Spoon or pipe cream cheese mixture into potato gem cups.

Step 5
Serve the cups sprinkled with remaining bacon and chives.

Photo and recipe courtesy of taste.com.au