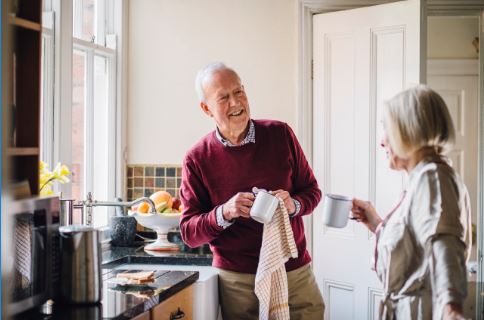 Living in shared accommodation used to be a rite of passage: a stage you went through between living at home with the parentals and buying your own home, but housing stress throughout Queensland, particularly in the south-east corner mean that a new group is entering the ranks of the state’s homeless –women over the age of 55.

Linda Mina, 68, a retired community worker who lives on the Gold Coast, is trying to find a solution to this growing problem through setting up and administrating “Seniors Share Houses” Facebook pages on the Gold and Sunshine Coasts, Northern NSW, Bribie Island, Gympie, Burnett, Hervey Bay and recently in Gladstone.

While public housing waiting lists are currently quite short in the Gladstone region, and rents are extraordinarily low, local renters are aware that the situation cannot last forever –  Linda says that attempts are being made to shift public housing clients within the state:

“The Department of Public Housing here (on the Gold Coast) they’re trying to offer seniors public housing immediately in Gladstone and Mackay,” she said.

“They say we can offer you a house immediately if you are prepared to move to Gladstone or Mackay,” she said. “They don’t want homeless people on the coast for the Commonwealth Games.”

She said however that seniors are far less mobile than their younger competitors for the share house market, often needing to remain close to trusted medical specialists, local services, and family members.

“Once upon a time I’d hop in the car and drive to Melbourne but now, it can be quite scary at times,” Linda said.

“I wouldn’t relocate because it would isolate me from my children,” she said.

She set up the original Seniors Share Houses page on the Gold Coast (currently with well over 1000 members) after her own experience.

“I was a carer for my mother. I’d bought a house with Mum to look after her, and that was about twelve years ago, and she passed away,”

“I’d been receiving a carer’s allowance, but after about two months, it mightn’t have even been that long, they put me on Newstart benefits at the age of 58.  My income dropped dramatically – Newstart payments back then were $240 a fortnight and that’s what the mortgage was – so something had to give.

“It was kind of a typical story really. Now that there are approaching about 4000 members on the Seniors Share Houses and Seniors Connect pages there are so many similar stories –  if you’re single and you earn a low income, something just has to happen.  You get sick, or you lose your job when you’re just that little bit too young for the pension and you have to exist on Newstart.”

It’s an extraordinary situation brought on by everyday factors these women have lived with – free caregiving, glass ceiling, pay inequality, divorce, part-time work and career breaks that have finally resulted in a lack of superannuation funds and assets.

Women fleeing abusive relationships, unexpected job loss, even a large expense or illness has brought women to the brink of homelessness, Linda said.

“I sold the house, I stayed at my daughter’s for a while until I recovered, I thought “I can’t burden her forever, what can I do?” I thought I’d just explore and I found that places like Gumtree and Flatmates.com weren’t very senior-friendly” and seniors don’t want to waste time applying for shares in a ‘party house’.

In addition, she says most older women will not go near crisis accommodation because they “are full of drug and alcohol abusers and not safe for senior women”.

She says the problem is huge but largely hidden because the majority of homeless women couch-surf or live with family and friends, so the statistics are underestimated.

“It’s a terrible situation where you never know if you’re welcome or simply being tolerated,” she said.

The success of the group is also largely hidden, as pride and privacy prevent Linda from publicly disclosing the many successful shares and “intentional co-rentals” that have been set up via her pages: “People of our generation don’t want you to know their business. And of course, they’re private about disclosing to friends that they can’t afford to live on their own,” she said.