Sunrise Crew wake up to Gladstone 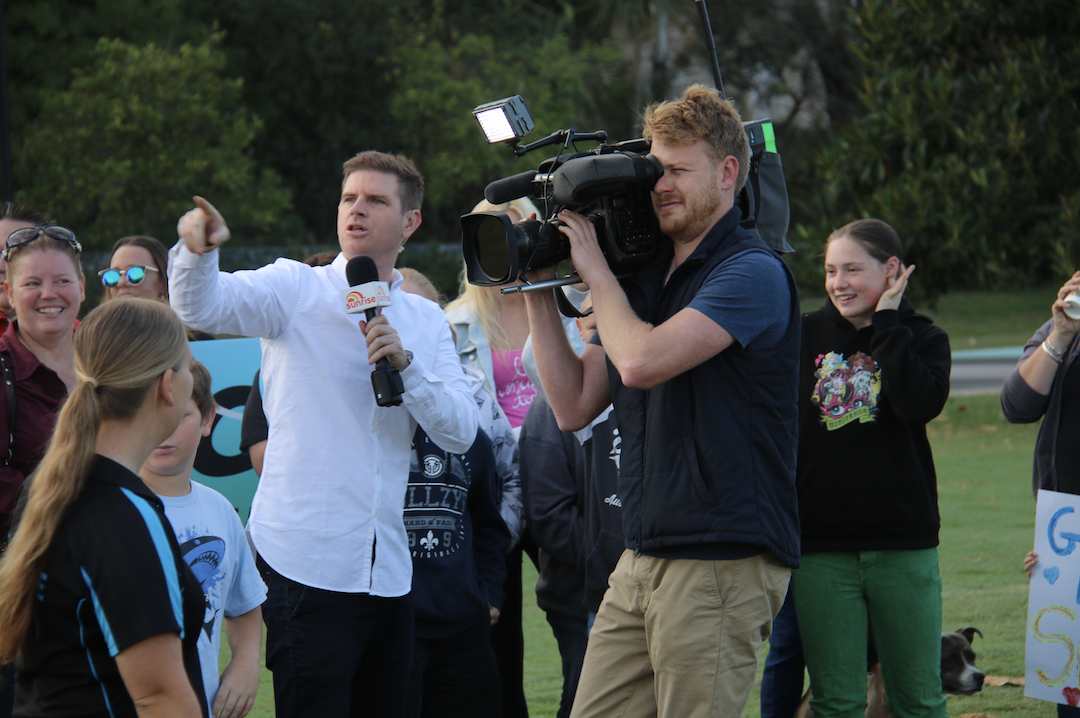 Posted at 11:46h in Entertainment, News, What's on by sales@gladstonenews.com.au 0 Comments

“That’s why it’s so lucky I have Instagram (@sammacinsta). Sometimes I forget where I’ve been!” the Sunrise weatherman said.

Making a flying visit to Gladstone last Tuesday morning, the Sunrise weather crew included producer Sean Flynn (“the Human Emoji”) camera operator Cam Edwards-Wallace and Paul on satellite links – he sits with the vehicle the entire time, running a gen set and maintaining the satellite connection between Sam Mac on location and the team in the studio.

Although Sam doesn’t often see the rest of the Sunrise crew – Sam Armytage, David Koch, Natalie Barr and Mark Beretta – so often, “we talk on the phone all the time and they’re very supportive, they always have been ever since I started,” he said.

Unlike his predecessor, Edwina Bartholemew, who stepped up to reporting on entertainment in January this year, he does not aspire to a role behind the newsdesk:

“With the sort of news that people are waking up to, with terror attacks and sad news, it’s nice to have us do something light-hearted and fun,” Sam said.

“Particularly for kids, you can’t have them thinking that everything in the world is bad.”

“We show the good things about what is happening in Australia because there are a lot of great things going on,” he said.

Working on the fly is a speciality for the Sunrise crew, and they have by necessity developed an amazing ability to work with what is available.

In Gladstone, this included jumping on a boat with a harbour pilot to spot a very obliging pod of dolphins who leapt out of the water, live on breakfast TV.

Later, Sam Mac persuaded GAPDL chief Darryl Branthwaite to channel his almost namesake belting out a chorus of “The Horses” accompanied by local band The Threadz. “Anything to promote Gladstone,” Darryl said.

McMillan who has a background in stand-up comedy has also produced two seasons of Sam Mac’s Single Bed a low-budget comedy/variety television show hosted from Sam’s actual apartment in front of a small audience in his kitchen, which aired on Channel 31 and Foxtel on Aurora Community Television.