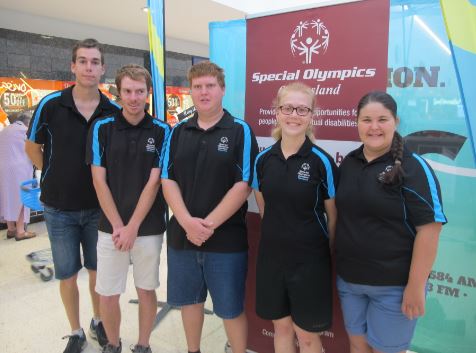 A crusade to give fundraising for our Special Olympians a boost was launched with a telethon and three-hour radio broadcast from Stockland Gladstone but they still have a little way to go before they attain their $38,000 team target.

Surprised at the lack of publicity surrounding the eleven local athletes who have qualified for the Special Olympics National Championships in 2018, GRC Councillor Cindi Bush, Joanne Lewis from Stockland Gladstone and local media outlets organised the event to give their fundraising efforts a shot in the arm.

More than $4000 was raised during the telecast which included interviews with the eleven athletes competing across three sports – basketball, soccer and swimming. You can support the team here: https://www.gofundme.com/apyvp-4cc-gladstone-observer-appeal

A former Special Olympics athlete from the nineties – Rachel Nugent – who competed in the 1989 Melbourne world games for the intellectually disabled, the Spain 1992 Paralympic Games and the Germany 1994 World Championships for disabled athletes reminisced about her time competing in the games which have as their motto: “Let me win, but if I cannot win, let me be brave in the attempt.”

“When Adam first started when we began in Gladstone back in 2011, he wouldn’t let go of my hand,” she said.

He didn’t like any attention whatsoever, didn’t talk or look at people.”

“What we hear from the coaches is that they prefer to coach our athletes, they’re happy, they want to be there, they want to improve,” Deb said.

Special Olympics is a year-round Multi sport program for children and adults with an intellectual disability of all capabilities. Inter-club competitions are held regularly in local communities with State Games held annually with Junior National Games and National Games held every four years

The next World Games will be held in Abu Dhabi and if our Gladstone stars are successful in Adelaide, that’s where they will be headed in March 2019. The World Games operate on a four-year cycle with a separate event for summer and winter sports. Athletes of all abilities can compete at the World Games if they meet the selection criteria.