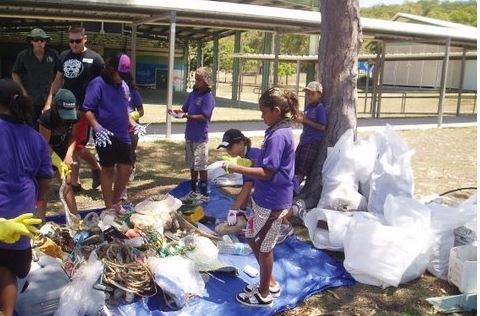 22 May Tangaroa Blue – Stopping Marine Debris At the Source

“Tiaki mai i ahau, maku ano koe e tiaki”… If you look after me, then I will look after you…”

“It’s a really dynamic workshop and I’m super excited to be bringing it to Gladstone,” Jodi said. “It’s a chance to get local people talking together and collaborating, giving them some tools and support.”

It’s great timing for the event, being held on May 31 in the week leading up to EcoFest where this year’s theme is: Turn a new Leaf, love our Reef.

As part of the Australian Marine Debris Initiative (AMDI) an on-ground network of almost 100,000 volunteers, communities and organisations from all over Australia contribute data from rubbish collected during beach and river clean-up events to the AMDI Database, and then work on solutions to stop the flow of litter at the source.

“The Gladstone Region boasts the third largest number of volunteer marine debris clean up groups in Australia,” Jodi said. “You just have to look around, we have so many amazing partnerships going with community groups and people like the Lions Club, but if all we ever do is clean up, that’s all we will ever do.”

“Using AMDI data, we can focus in on an issue for our local area, so we’re making smart changes to reduce the debris at its source.

A place at the Marine Debris Source Reduction workshop, which will be held at Tondoon Botanic Gardens on May 31 from 9 am until 2 pm can be booked by e-mailing Jodi: jodi@tangaroablue.org