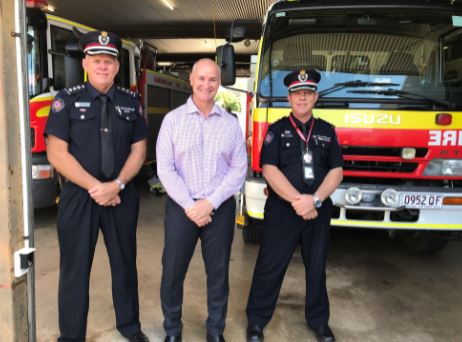 Ten newly recruited firefighters will be assigned to the Gladstone Fire Station in the largest increase to their staffing in over a decade.

Member for Gladstone, Glenn Butcher who has lobbied for an increase along with Gladstone QFES Inspector Barry Maluga for several years, applauded the deployment, which is the first stage of a $29 million commitment Palaszczuk Government commitment to deliver 100 additional firefighters across the state.

“We know industry in Gladstone operates 24 hours a day, 365 days a year and these new
firefighters are certainly welcome additions,” Mr Butcher said.

“It is absolutely critical.  If we have a major incident in Gladstone, we need to know we have the equipment and the people to come and help to fight these incidents.”

“We’ve had great coverage from the service here filling in on their days off and calling in for overtime, but what we’ll achieve now is making sure that those people get their time off and can return to work well-rested, fresh and ready to go.”

Talented trainee firefighters are usually ready to start work at their new station within seven or eight months:

“I think it’s absolutely awesome – the ability to supply specialised firefighting appliances to the community 24 hours a day, seven days a week immediately rather than having to wait for callbacks after hours,” he said

“The service delivery is just going to be so much better, so much quicker and I think it’s a fantastic thing from an operational point of view, and for the community.”