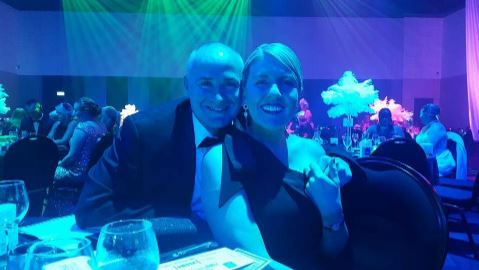 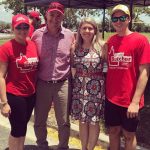 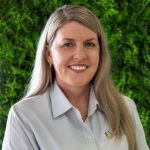 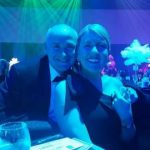 Glenn and Theresa at the Mayor’s Ball

Now that the dust has settled on what local MP Glenn Butcher called “the most bizarre election campaign he’s ever seen” returning him to the seat of Gladstone with an increased majority and with the ALP returned in their own right – we invited his wife Theresa to tell us about the ‘wild ride’ of the life of a parliamentary wife.

Her story however turns out to be a local story of hard graft, loyalty, the slow climb upwards and strong community ties.

Both from local families, Glenn’s former trade as a mechanical fitter, union membership and experience at the helm of Gladstone’s Rugby League scene, made him a perfect fit to take back the Labor mantle after twenty years of independent member Liz Cunningham in the hot-seat.

Educated at Star of the Sea and Chanel College where both her parents Dave and Joanne Gourley, as well as her children, Taylor and Blake, attended school, it was through one of her many cousins that Theresa first met Glenn in the early 1990s here in Gladstone and they’ve been a team ever since celebrating their 21st wedding anniversary in October.

Their second meeting was a little confusing, in fact, Glenn denied it had even happened. “I wasn’t even out that night,” and it was so that Theresa learned her new beau had a twin brother, Wayne, now a senior sergeant at the Gladstone Police Station.

The Butcher boys haven’t pulled any Parent Trap– style shenanigans since then: “I used to say to Glenn he could walk ahead of me on the pedestrian crossing, in case anyone tries to run him over thinking that it’s his brother, the cop,” Theresa said. “But I’ve heard Wayne’s wife say the same thing in case people think he’s Glenn.”

Both Theresa and Glenn’s parents and families support the campaign and with such a huge extended family still living in the region, Theresa’s community ties are deep and wide.  She has held a “casual” job at Gladstone Chiropractic Clinic for twenty-five years. She and Glenn both found it odd and disappointing that the three other parties contesting the seat of Gladstone were from out of town with the Greens candidate failing to visit the electorate at all during the campaign.

Not without sympathy for the other parties’ candidates facing the Butch juggernaut at first: “I think we reached the point where he just needed to stop talking,” she said of LNP candidate Chay Conaglen’s swipes at the ALP candidate and his volunteers.

Despite a rash of positive comments for every negative one, Theresa said: “I tend to zone in on the dissenting opinions.  I just think it would be nice if people could be educated before they make these comments, because some of them are so far from the truth,”

She had been known to respond to comments personally online or in a letter to the editor but: “I’m getting better now,” she said.

“You just have to leave it,” Theresa said. “I know what the truth is, most people know it and there’s always a few hard-core people who you’ll never change.”

Even with the result almost a foregone conclusion, the sheer numbers who volunteered for the “Red Army” surprised the campaign team including Glenn’s ‘work wives’ Tara Manning and Jill Hopson in the electorate office and campaign manager, Shelley Holzheimer:

“Shelley said this time she didn’t have to do too much organising,” Theresa said. “We ordered 200 shirts, they went straight away. We ordered another two hundred shirts and they went too.”

More than fifty corflutes have been souvenired, with Butch’s Facebook page suggesting they’ve been taken because our local member is ‘a good-looking rooster’: “Oh sure,” says Theresa. “Yeah, there could be a couple stuck to ceilings around town, decorating walls,” she laughs.

The negative comments from Glenn’s detractors hurt Theresa less and less but she admits social media barbs can be confronting: “From my perspective, I read way too much into the social media side of things – Glenn doesn’t,” she said.

“One of the worst things is feeling like you are under scrutiny all the time. That’s probably the worst thing not just for me but for the kids as well,” she said.

“Blake is still young, he’s twenty, he’s a pretty smart boy, he’s not silly – I tell them just to be careful what he posts on social media,” Theresa said.

“With a few other MPs, when they were first elected last time, obviously people went trolling through their pages looking for things that they had said – fifteen years ago or whatever – and then publishing it.”

“That’s not fair on the family side of it but that’s the way it is, that’s the world we live in.

“We’re lucky that they’re both good kids and so are their friends. We’ve avoided the worst. And really, I think they’re used to a degree of social control here in town anyway,” she said.

“I’m from a very big family – Mum and Dad are local and there’s nine in each family – so there’s a lot of aunties, uncles and cousins – they can never go anywhere without someone saying, “are you one of Theresa’s?”

Another negative aspect of political life are the constant absences, extensive travel and long hours for which neither Glenn’s shift-work at QAL nor executive responsibilities with Gladstone Rugby League had prepared them:

“We’re lucky that the kids are grown up. They’re both working and (daughter) Taylor is engaged to be married but they’ll still ring up and say, “Where’s Dad?”

“You do get lonely sometimes when he is away – recently he was away for a week, I think he got home Friday night late, I had to work Saturday morning and he had to fly out again Saturday morning, so it was like “Hello. Wash your clothes, iron them, goodbye, off you go”

“At least if he worked FIFO you would know what the roster was. I think this is worse – it is like FIFO, but I just take it week by week. He did shift work – and you just knew what you were doing so you could work around it but now you never know what’s coming up,”.

It’s clear though that both Glenn and Theresa hope the ride lasts a little longer yet:

“He’s very happy doing his Assistant Minister role. I think all the ministers have been re-elected, so I think he’s just going to wait and see. See what the party has to say,” Theresa said about speculation that Glenn could be elevated to a cabinet position.

“It’s like with any job you just slowly work your way up. We’re very proud of him though he’s done very well in the short time he’s been in there.”