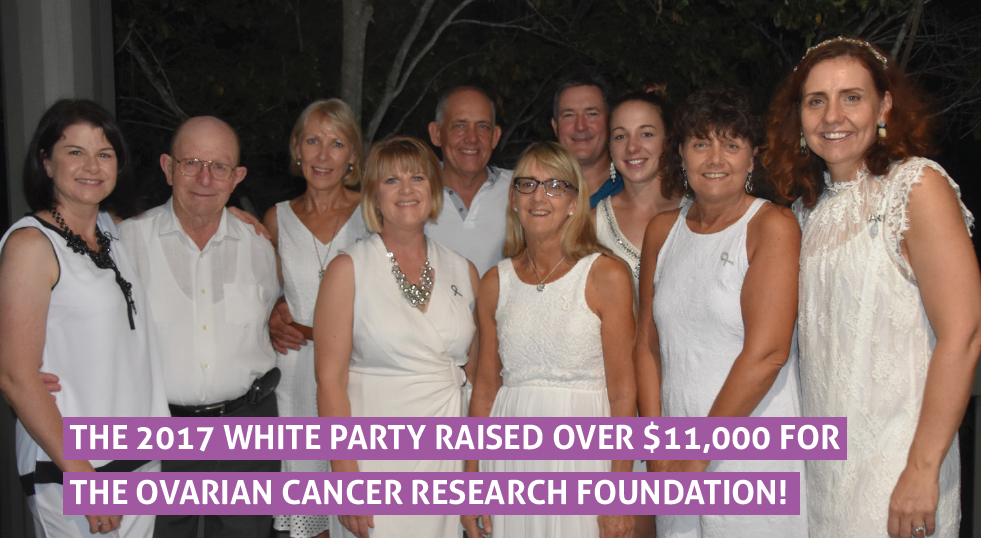 Posted at 10:39h in Charity, Community, Local, What's on by News 0 Comments

This event was conceived (pardon the pun) locally, is supported by local business and attended by local women. Four years ago I held the first White Party at my house with around 25 friends and family based on the concept of a girls night in. The next year it grew to 55 ladies after which I decided our house was not the best venue anymore, and so in 2016 we moved it to the Botanic Gardens.

In 2016, the event was attended by over 90 women and raised over $9000 for the Ovarian Cancer Research Foundation (OCRF). This year over 110 women attended and I was contacted many times since ticket sales closed by others seeking to access tickets. The response has been overwhelming.

Local businesses were very generous in their support, from Zeta Ware who supplied the linen to Yaralla Fitness Centre, which supplied over $1000 in membership vouchers.

I’m absolutely thrilled this year that my Dad and many of my family – including three sisters, my brother, nieces and their ‘other halves’ are travelled from Toowoomba to Gladstone to be part of the White Party. That made the party extra special (and perhaps subjected me to some extra pressure)

I hold it in memory of my mother, Maurine Allport, who passed away from Ovarian Cancer after battling it for more than three years.

An early detection test – which is what OCRF are working so hard to develop – would likely have helped my mother and thousands like her. Often the symptoms (OCRF website has further details) seem nothing out of the ordinary and by the time the disease is detected is too late. It is, therefore, a particularly insidious form of cancer.

As OCRF points out, one woman dies every 10 hours from Ovarian cancer. It has never ceased to amaze me the number of people who comment that they too have been impacted by Ovarian Cancer, or their friends and family have been. It perhaps doesn’t receive the attention that other cancers do, but it certainly impacts many lives.

On Saturday night there was great company, fantastic food and over $3500 in goods for the prizes, raffles and silent auctions on the night including Tiffany sterling silver jewellery for our major raffle. Dr Emilia Dauway who is a Gladstone-based surgeon (she mainly deals with Breast cancer as I understand) spoke briefly to help raise awareness among those attending the event. Over $11,000 was raised for OCRF!

I also have to acknowledge the wonderful support of my husband, friends and family in helping put the event together. My ‘White Party Crew’ are truly wonderful!