The Frank and Barb McKee Lookout 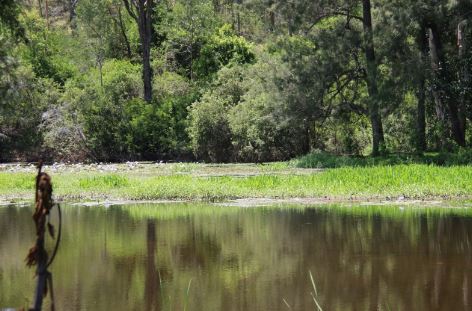 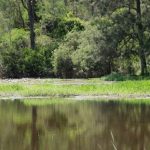 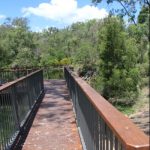 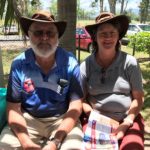 Like any good mechanic, when embarking on a project, Frank McKee consulted the handbook.

Many Peaks Railway Dam has turned out to be the undertaking of a lifetime, with Frank clocking up hundreds of hours working on what was once the water source for a community of several thousand.

For his efforts, Gladstone Regional Council decided in their meeting on 21 November in Ubobo that the recently constructed elevated viewing platform at the dam has been named the Frank and Barb McKee Lookout after Frank and his wife, the driving forces behind the restoration of this beautiful local spot.

“I sort of had a yarn to Barbara and we decided it was just too good a thing to just let the creek blow up and let the creek return to its natural habitat,” Frank said.

Their son Willy was only three. He’s in his thirties now: “Since ’89 we’ve been working on it. Almost three decades.”

Blocked by debris with a metal grille impeding the water flow the gravity-fed system which once supplied water to Many Peaks and surrounds was only holding 10 percent of its capacity and the water quality was so poor that nobody could use it.

The history of the project charts the involvement of the Gladstone Port Authority, the Calliope Shire Council, the Gladstone Regional Council, local equipment-hire firms and scores of locals who donated their time “working like sewer rats” to de-silt and clean out the pipes and pumps, at the urging of Frank and Barb.

“I know we’ve been there for a long time just chipping away at it and I suppose to a certain extent I have bullied the bloody councils into doing something when they didn’t want to. You don’t get too many accolades for that I suppose,”

Frank operated a mechanical repair business in Builyan for 28 years after working as a mechanic for Summers and Zwisler for 17 years, so consulting the railway archives for the blueprints for the dam was an important step:

“It’s got in there every specification that you could possibly look for. It was a real help because it told us what was in there, and helped us to get in there and work out exactly how we were going to attack the whole show,” he said.

As president of local Builyan Many Peaks Community Development Association and a volunteer for pretty much everything going, not much in the Boyne Valley gets past Frank, but the naming of the Frank and Barb McKee Lookout was a surprise:

“We were fairly chuffed about that. How they kept it a secret in the Boyne Valley, I don’t know,” he said.