Orange is the new Black at Pauline’s meet ‘n’ greet 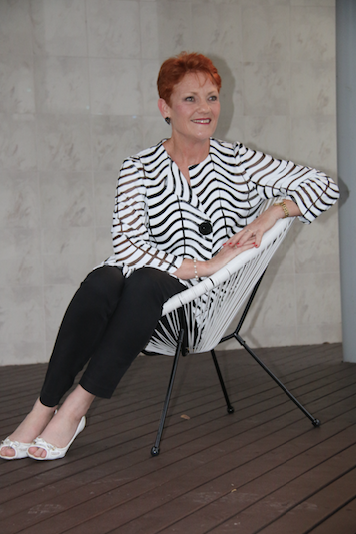 Fashions on the field was a bit disappointing this year…..

Drawing a crowd of around 70 people, the Queensland Senator and founder of the party which bears her name – Pauline Hanson’s One Nation – was largely preaching to the choir, with many eager to obtain trademark orange trucker hats and t-shirts to show their support.

After speaking individually with almost every attendee, Senator Hanson then addressed the crowd, occasionally interrupted by merriment from hundreds of “5 pm on Melbourne Cup Day” revellers over the road at Lightbox.

“It’s very consistent in my electorate, business people, farmers, graziers, all have issues with high electricity costs, that’s right across the board,” Sharon Lohse said.

“I visited a service station in Theodore and their monthly electricity bill is $7,500. There is work for three to four people but the couple who run the business can’t afford to put anyone on full time because of high power costs.”

Amy Lohse may not live in Gladstone yet, but as she explained, as an itinerant rural worker, you gain an understanding of the issues comparable to a local:

“Even though I am 23, I have travelled throughout Queensland and the Northern Territory and I have lived in my ute and in my horse-float to find employment,” she said.

“I represent young people. We need a young voice in parliament and we need someone with a rural background who has a rounded experience, we need a fresh approach in Gladstone and I am bringing that,” she said. She also came out strongly in support of a high school for Calliope, in the electorate of Callide being contested by her mother Sharon, saying she is passionate about providing more opportunities for rural youth.

“Calliope has 320 high school students travelling into Gladstone every day just to go to school. We can’t afford as a state to have so many families having kids travel that far just to get an education and as well as that we need more apprenticeship schemes, we need more tradespeople and employment, we need more youth opportunities,” she said.

Amy Lohse and the Greens candidate Peta Baker were no-shows at a “Meet the Candidates” function at the Gladstone Entertainment and Convention Centre foyer on Monday, November 13.

The debate was attended by sitting Member for Gladstone, and ALP candidate Glenn Butcher and LNP candidate Chay Conaglen.