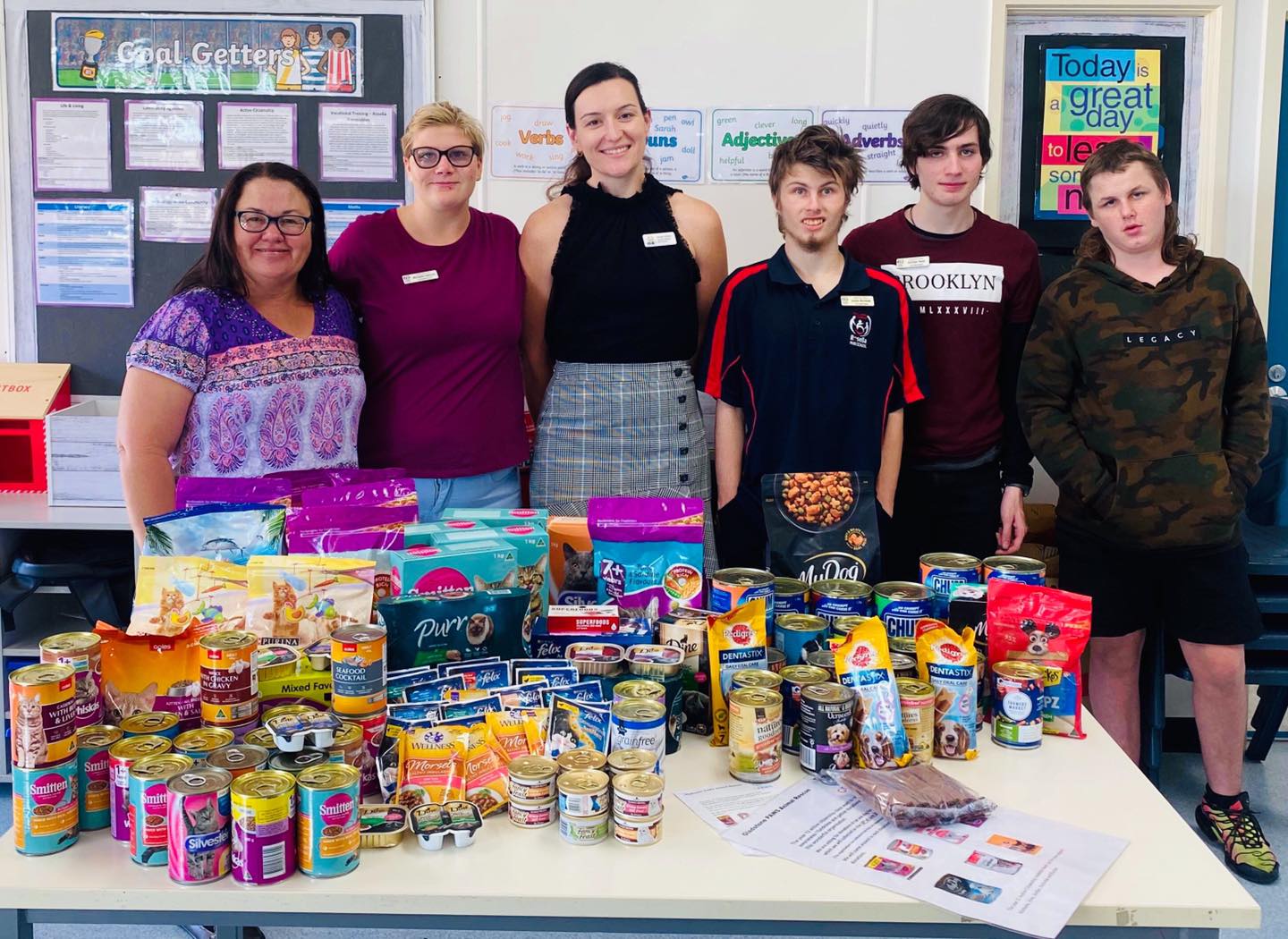 The year twelve ‘Active Citizenship’ class from Rosella Park School has made a large donation of food and treats to local animal rescue and welfare group Gladstone Paws.

Rosella Park School is one of Gladstone’s leading providers of Special Education, with a high-quality curriculum which aligns to departmental expectations and assesses learning outcomes using a variety of testing instruments dependent upon individual ability.

Year twelve students from Rosella Park School study a subject called ‘Active Citizenship’ and a major part of the course is investigating how they can participate and contribute to their community. The students were assigned to research organisations in the local Gladstone community that would benefit from their fundraising efforts.

The students considered a few options from around the region, discussing them in class before taking a vote and deciding on Gladstone PAWS.

“Not only were they learning of the importance of contributing back to their society, but they were also learning how to work with each other and they were developing skills that would be useful for a job later.”

“They chose the organisation and decided together that the best thing to do would be to donate food. The students then needed to get permission from the Principal, so they took their proposal to them. Once they had permission the students advertised what they wanted to do by putting a story in the newsletter, they then chose a date and everyone from around the school brought in donations.”

Nicole Allison President of Gladstone Paws was very grateful for the donations.

“These donations are hugely important both either monetary donations or food. We don’t get any ongoing money, sponsorships or government support, so we rely heavily one-hundred percent on the public from donations to helping out with transport to adopting the animals at the end.”

“Without public support across all those levels, we wouldn’t be able to save the animals that we do.”

Nicole went on to say that it was really enjoyable to get involved with the younger generation as they are the ones that will eventually take over this much-needed work moving forward.

“It was great to see that passion and enthusiasm at such a young age and that genuine love of animals is really refreshing and reminds us why we do what we do.”

Jo-Anne from Rosella Park explained the benefits of this program,

“This program gave the students a real sense of belonging to our community, they learnt that no matter who you are, you can always give back to the community. They learnt a variety of skills during the process like how to work with each other, they had to compromise to come to agreements, they also learnt a large range of technological skills by creating posters and they had to publicly speak in front the rest of the school. So a lot of life skills and future employment skills were practised within that process of fundraising for a charity.”

To donate to Gladstone Paws and learn more about the organisation head to their website: gladstonepaws.com/get-involved/