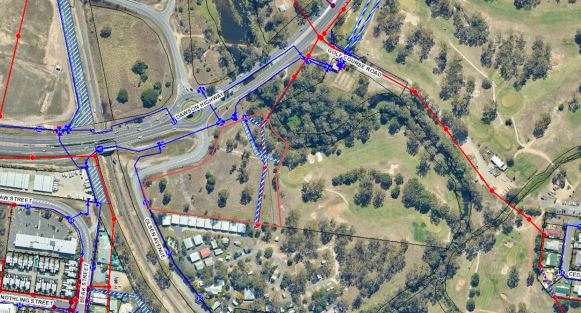 Aerial view of the subject site

A development application to establish a carwash on Olsen Avenue has received conditional approval by the Gladstone Regional Council despite strong opposition to the plan from nearby residents.

Fifty-five objections were registered against the car wash, which is proposed by Wolves Football Club.

Objections regarding noise, light pollution and vehicle traffic were principally made by nearby residents, almost all retirees.

Council voted four to two for the car wash to go ahead. Mayor Matt Burnett abstained from voting, saying that his active involvement with Wolves Football Club created a conflict of interest.

The carwash would only be permitted to operate from 7 am until 10 pm and be bound by statutory regulations regarding acceptable noise levels. The car wash would also be prohibited from operating any ancillary business – e.g. a shop – on the site. One of the conditions imposed by council in their approval is the installation of an acoustic fence on the border with the van park.

Councillor Kahn Goodluck endeavoured to modify the application to end daily trading hours at 8.30 pm rather than 10 pm. That motion was carried, the operational hours condition being amended from 7:00am to 8:30pm.

Owner of the Kin Kora Village Tourist and Residential Home Park, Monte Olsen, is vehemently opposed to the development. Cabins occupied by his permanent tenants, mostly retirees, are located only 10 m from the proposed site.

Mr Olsen (after whom the street is named) developed the Kin Kora van park some 22 years ago when the land was, he says – “an overgrown piece of garbage”. He developed the land to become the first 4 ½ star caravan park in Gladstone.

“The four blocks at the end of Olsen Avenue, they’re just retired people who want to have a quiet life,” Mr Olsen said.

He also says there is absolutely no need for another carwash in Gladstone, particularly in that area:

“We need another commercial carwash in Gladstone just about as much as we need another jewellery store at Stockland,” he said. “We just got a new car wash at the mall, is this going to cut their throats when they have just started up?”

“That’s why people are going down the tubes, because council don’t back local business.”