What did you do in the war, Pop? 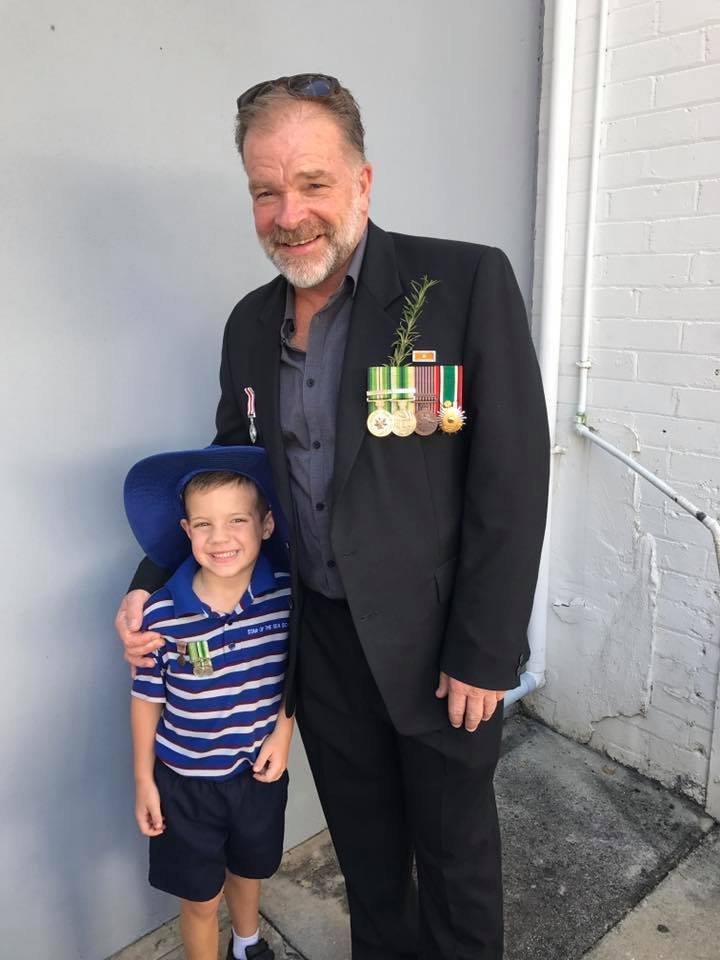 Ollie Mafrici is excited. He marched for the first time on Anzac Day last Wednesday wearing his Pop’s medals and he couldn’t be prouder.

His grandfather Sean Balkin, a veteran of the first Gulf War, was a medic attached to the highly specialised RAN Mine Clearance Diving team #3.

His unit received a meritorious service commendation for their service – clearing mines in the liberated harbours of Kuwait under the oppressive smoke of burning oilfields.

The operation began with a bit of military subterfuge.

Sean and his unit were gearing up for the 1991 Australia Day long weekend, when on Friday January 25, a signal was received from Maritime Headquarters that they were to be deployed to the Persian Gulf to assist the Allied response to the Iraqi invasion of Kuwait.

“We found out on the Friday that we were to fly out on the Sunday.  So, we were on 48 hours-notice,” Sean said.

“The unit was despatched under a bit of a cover story that we were to join HMAS Westralia – a ship serving in the Persian Gulf for ‘mine warfare and battle damage repair’ – we went there and had a photo taken and then we were flown from there into Bahrain to prepare for the beach clearance in preparation for the amphibious assault,” Sean said.

Within half an hour of posing for the cover story PR photos, the 23 members of the team were back aboard their C-130s landing in Bahrain right in the middle of a SCUD missile alert.

“We went into Bahrain and worked up clearance activities for an amphibious assault – beach clearance and all that – but lucky it never eventuated.”

“Then we went into Kuwait itself for mine clearance and explosive ordinance disposal operations. Whilst our team were less than 50 per cent of the multinational dive force, the Australians cleared seventy per cent of the first harbour,” Sean said.

Australians are internationally renowned as good soldiers, which Sean says is his idea of the Anzac spirit:

“Without having a go at it, that’s probably where the Anzac spirit or the Australian military attitude comes to the fore,”

“Get up, get in and get the job done – work hard, play hard, look after each other.”

The first couple of ports needed to be cleared in a hurry to get in humanitarian aid and supplies for the country. The conditions were very austere with the oil fires and bad environmental conditions with the sun burning through the thick oil haze, most day sit was like night.

“But all the Australians needed was transport, aside from that we were self-sufficient.”

Enlisting at 15 years of age and trained by the navy as a medic specialising in submarine, hyperbaric and underwater medicine  – Sean says the role of a medic extends further than medical care:

“I don’t like to say too much and I’m not concealing anything, but we were in a warlike environment. There was small arms fire going off around us, and the guys were working with live sea-mines that they’d recovered, so the potential for danger was everywhere.”

“One of the things about being the medic is that you’re also a lot more – you’re the medic, you’re the hygienist – you have to make sure they’ve got good facilities for health and hygiene, make sure the food preparation is good,” he said.

“Being away from home, some people are recalled at very short notice from leave – and you’ve got very highly trained people, who are very wired,” he said. “So, I was there to do a bit of chaplaincy and counselling as well.”

He says the relevance of Anzac Day is still abundantly clear to the younger generation: “It is great to see the crowds and the history associated with it and I think a lot more of the ex-service community are getting involved,”

“But whilst we have a great day at the RSL and at all the functions, it really is all about the March and the Services. It’s good to catch up with mates, to meet new friends who’ve had similar experience of military service; It doesn’t have to be active service, it doesn’t have to be anything. You can’t devalue anyone’s commitment.”

A life member of the RSL, mostly associated with the 1770 sub-branch, Sean says in other areas younger veterans are joining in greater numbers.

“I think places like the Sunshine Coast and the Gold Coast there’s more younger veterans who are RSL members. I think the deputy president of the RSL in New South Wales is a veteran of Afghanistan,” he said.

“There’s other groups too – like the Australian Surfing Veterans.”

Sean, who currently works as a paramedic supporting the LNG industry says a lot of younger veterans don’t have time: “I think that you know, a lot of us at this age are taken up with busy working lives.” 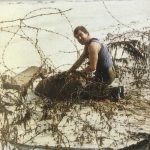 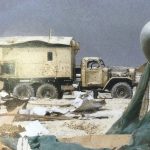 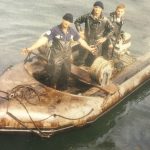 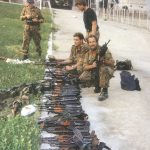 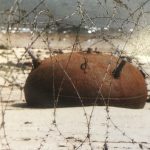 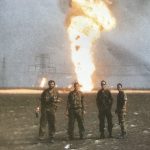 CDT 3 team members pose for a picture in fromt of Iraqi ingnited blazing oil wells at the Burgan Field. Sometimes it rained oil 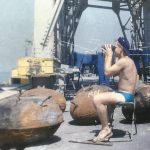 Sean Balkin – in full battle order – at the mine safety site 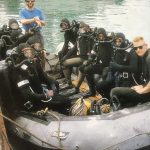 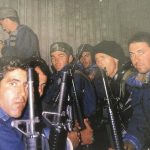 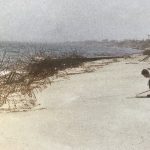