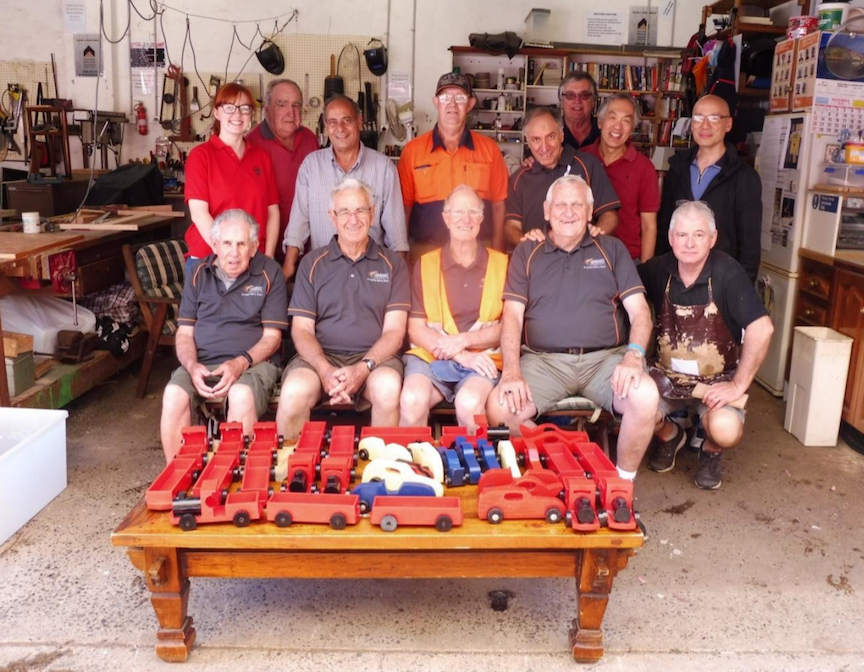 This week Men’s Sheds around the country will celebrate their contributions to strengthening local communities.

Men’s Shed Week – Doing Local Good (25 Sept – 1 Oct 2017), is the second annual celebration led by the Australian Men’s Shed Association to highlight just how far the benefits of Men’s Sheds reach beyond the shed and into local communities.

Gladstone Men’s Shed spokesman Ron Steen said the Gladstone branch was busy with preparations for the official opening on 14 October of their new, permanent shed at 18 Moura Crescent, Barney Point.

Aside from getting ready for the opening, the sixty strong members of Gladstone shed manufacture toys and furniture for childcare centres.

“We have what we call the Early Childhood Services Project, Gladstone Ports Corporation supply us with the funds for materials and we supply various toys and furniture made by members to about 30-40 childcare centres,” Mr Steen said.

“One of the items we make is a ‘mud kitchen’ with a table and sink and running water for the children to play with outside,” he said.

“We have sixty members just in Gladstone and about 30-40 will turn up on any one day. They can work on their own projects, of course, but that’s our main one if someone is looking for something to do,” he said.

The Gladstone Men’s Shed has been running for about six years, there’s also a Men’s Shed at Boyne Tannum, which was established 2-3 years ago. They too are moving to their own building in the coming weeks.

The Calliope Men’s Shed started up last year and has its permanent home at the Calliope Historical Village.

With over 1000 Men’s Sheds in Australia, members and volunteers from almost every shed participate in grassroots projects, events and programs for the benefit of communities.

“The Australian Men’s Shed Association has now been at the forefront of a whole range of innovations for a decade,” says AMSA Patron and International Men’s Shed Organisation Convener, Adjunct Professor Barry Golding.

These innovations have been picked up and adapted by other associations worldwide, to support over 2000 Men’s Sheds now operating around the world.

Find out more at mensshed.org.