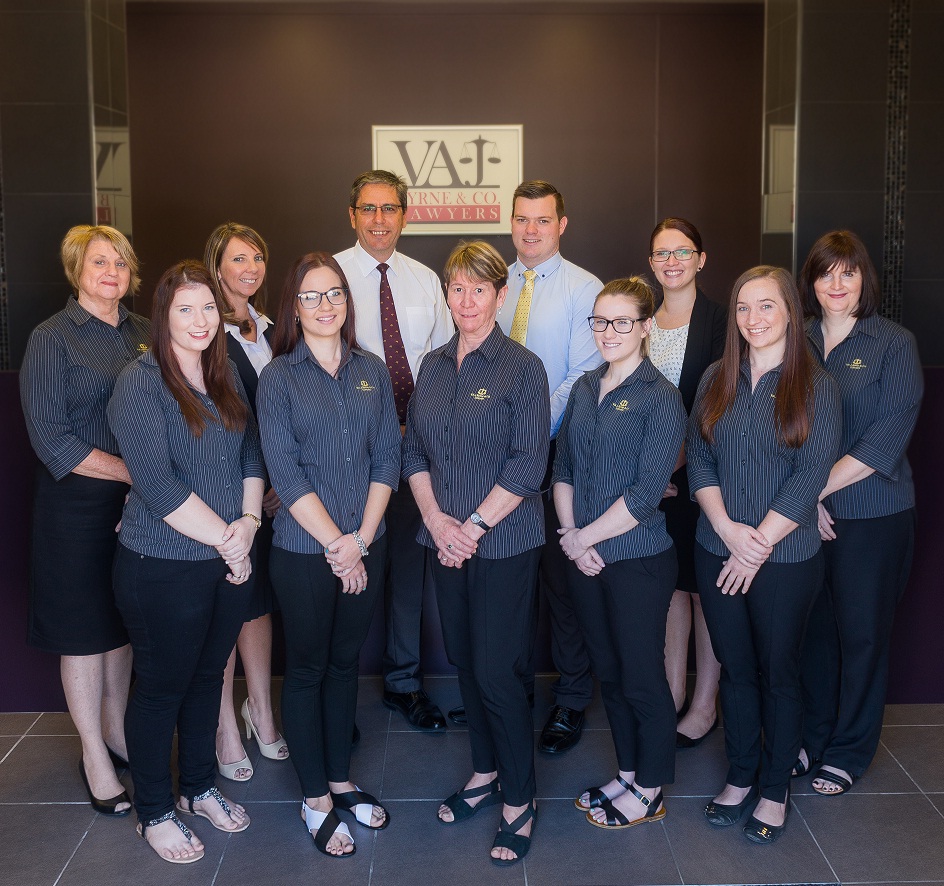 This year, local law firm V.A.J. Byrne & Co. Lawyers mark 85 years of service. Not only does this make the business the oldest serving law firm in Gladstone, but it is also an exciting and admirable milestone.

Vincent Arthur Joseph Byrne was born in Warwick, Queensland in 1906. At 20 years old Vincent was admitted as a solicitor and practised in partnership of Byrne & Hobler until founding his own firm, V.A.J. Byrne & Co Lawyers in 1931.

In 1953, Roe Aloysius Roy O’Neill was admitted as a solicitor at 27 years old. Upon admission Vincent Byrne admitted Roe to partnership of V.A.J. Byrne & Co. Having worked with the firm prior to admission as an articled clerk, this partnership continued until Vincent passed away in 1976. Roe retired as a partner a few years later in 1982 and left the firm with Keith Bates, Peter Roche and newly admitted partners Bernard Moran and Barry Ross.

Keith became qualified as a solicitor and commenced employment with the firm in 1972 and was eventually admitted to partnership 7 years later. In 2000 Keith Bates retired from partnership, however maintained involvement with the firm for some years as a consultant before retiring to his grazing property. He still maintains contact with the firm and participates in its formal events and celebrations.

Barry Ross was admitted to practice as a solicitor in 1980 at 26 years old. He is an accredited specialist in personal injury. The firm employed Barry in 1982 and was admitted as a partner only 6 months later.

V.A.J. Byrne & Co. was incorporated on the 1st of July 2011 and currently has two directors, Anton Bierman and Kylie Devney.

“V.A.J. Byrne & Co. has at all times had at its core, principals and support staff drawn from the local community that were “Gladstonians” at heart and considered themselves as being part of the community often rendering gratuitous assistance to charities, church groups and sporting organisations. That still exists today and whilst there is a need for lawyers in our society, I am confident that V.A.J. Byrne & Co will grow and continue on to celebrate its 100th anniversary and beyond.”
– Mr Keith Bates

AT THE CORE OF V.A.J BYRNE & CO’S VISION IS ACHIEVING EXCEPTIONAL OUTCOMES FOR THEIR CLIENTS.

The firm values service above all, offering cost effective solutions and confidentiality like no other.  As a locally owned and operated business, we offer accessibility to our lawyers that consult with you to tailor a practical solution to your issues. Efficiency is having the job done well in the first place, rather than risk paying for the costs of fixing mistakes down the track.

V.A.J Byrne & Co believe the most important aspect of the lawyer client relationship is TRUST. Trust, experience, competence and genuine concern with plain talk and straight answers is available to you when you retain us.
The firm is also extensive in areas of law that they cover from personal injury law, dispute resolution and court matters. Barry Ross practices in all types of litigation, commercial law, wills and estates and all general law matters in addition to being a notary public. Director and owner Kylie Devney works in criminal law, family law, conveyancing and wills and estates. She is also the practice manager. Director and owner Anton Bierman primarily undertakes commercial and business law but is also heavily involved in property law and planning of wills and estates. Monica Erridge predominantly practices family law, however she also continues to work in commercial law and wills among others. While newest to the team, Ryan Mitchell manages the conveyancing department and also practices in criminal, family and commercial law as well as wills and estates. All five solicitors undertake litigation and general court matters.

Barry Ross has lived in Gladstone since 1982, marrying his wife Heather in January 1990 and together raising two sons and a daughter. What he loves most about Gladstone is  that he can be at his farm in under an hour, or visit the beach in minutes.
“Don’t tell too many people about what we have here. In my profession it has never been a disadvantage to my clients that CBD lawyers, for example, in Brisbane assume that my client may not be represented as well because my client has a rural lawyer. In fact I am happy for a CBD lawyer to assume that and pride myself on my client taking advantage of geographical snobbery. We are privileged to live and work in Gladstone. It will power ahead.”

Kylie is a born and bred local to Gladstone, leaving for university and returning 6 years later after graduation. She is a devoted member of the community, often using her weekends to assist fundraising events as a Rotary member, when she isn’t watching the Broncos dominate the NRL season. Kylie loves that the region has a great sense of community!

Monica relocated to Gladstone from the Gold Coast in 2007. She has worked with the firm ever since, dividing her time between the office and working at home to ensure she has time with her two children. She says “When we moved to Gladstone I enjoyed the thought of having a family here due to the huge influence of sport on the community. My son plays soccer and is looking at commencing basketball, and my daughter does ballet classes.”

Ryan says “I love that Gladstone is in close proximity to some of the best locations in Central Queensland, which is great because I like to get out camping and fishing when I can. Also the supportive community, and the pride that locals have for their town.”
Ryan was born in Gladstone and spent a lot of time here growing up. He moved back permanently in 2015 and now lives with his partner Amanda.

Anton and wife Karin have lived in Gladstone for 10 years now, with two children Adele and Werner. Most of all Anton loves spending his weekends with his family, and what he appreciates about Gladstone is the friendly and helpful people that he lives here with.