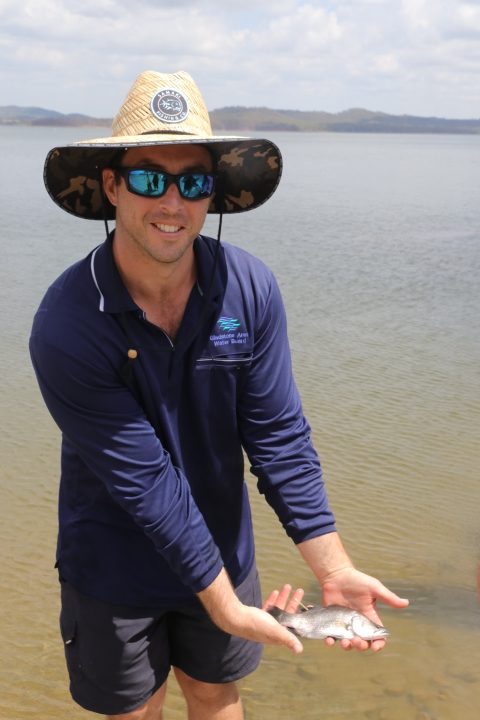 Posted at 11:13h in Environment, News by News 0 Comments

Gladstone Area Water Board (GAWB) along with Jenny McGuire, president of the Boyne Tannum Hook Up,  and Justin Nye of Gladstone Fly and Sportfishing joined forces on Thursday to release the last of the season’s Barramundi fingerlings into Lake Awoonga. The fish, which average 22cm in length are distributed in various locations across the lake.

GAWB Hatchery and Fishery Manager, Thomas Hayes said that as part of GAWB’s environmental obligations, they breed and release about 300,000 Barramundi fingerlings into Lake Awoonga each year. On Thursday 450 tagged fish were released into Lake Awoonga. “These fish are 150 days old and it is a great sense of satisfaction for us to put them into the lake and seeing everyone get out there and catching them. The brilliant thing about this is we create a fantastic fishery as a side product of meeting our environment obligations,” Mr Hayes continued.

“That’s why we are pleased to announce our support for the Boyne Tannum Hook Up for the third year, by sponsoring the three tagged Barramundi in Lake Awoonga, worth $5,000 each if caught over the Hook Up weekend. For GAWB, this is the perfect partnership, because, like the Hook Up team, we want to promote sustainable recreational fishing within the region,” Mr Hayes said.  The three adult Barramundi will be caught from Lake Awoonga and fitted with a tags before being released back into the lake just prior to the event.

With a surface area 7000 hectares, there is plenty of space for fisherman to get out on the water and enjoy Lake Awoonga. Don’t forget to download the GAWB Track My Fish App.

The App helps GAWB understand and monitor the health of the fishery by providing data to GAWB staff on the number, size and health of catches to help inform thestocking program.