Best in Show for Gladstone Quilter 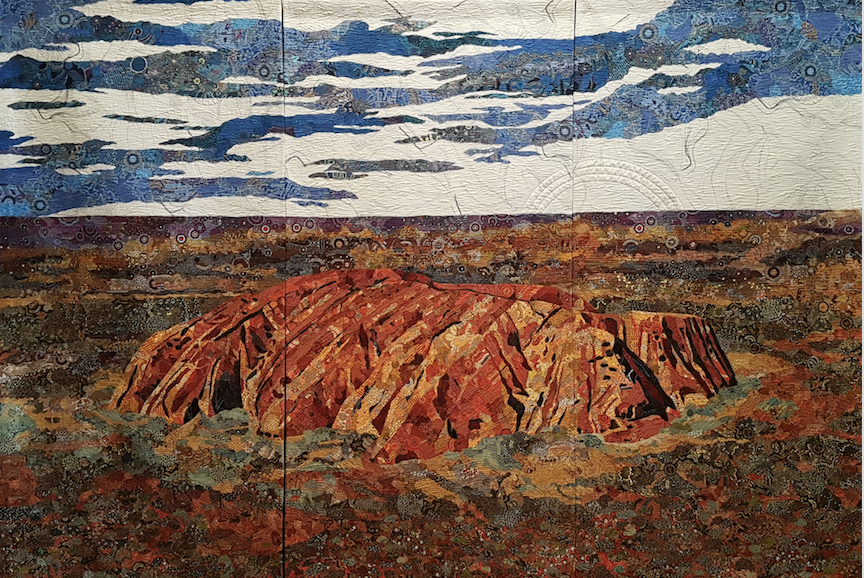 A Gladstone quilter has taken out the supreme honour of Best in Show at the Brisbane Exhibition, for an artwork she devised to form a backdrop for her daughter’s graduation recital from the Royal Conservatorium in Antwerp.

Terri Ahrens, who owns Sew Patch and Quilt on J Hickey Avenue, waved farewell to daughter Maddilyn Goodwin a few years ago when she commenced her Masters, first in flute, then in piccolo at the prestigious school of the arts in Belgium.

Graduating this year as the first Australian to enrol there, Maddilyn decided her final recital would explore how Australia has affected music and culture. This became “The Sunburnt Country” project, performed on 19 May this year.

“She commissioned some Australian composers to write music for her performance, it was going to be a world premiere of that music. She asked if I would do a backdrop for her, an art piece, to go behind her on the stage,” mum Terri said.

“She also some poetry readings and a couple of Australian dancers who were in Belgium and the Netherlands agreed to choreograph some dance for it as well.”

“We went over for it, took the quilt with us and it was just an amazing occasion.”

The quilt, which contains in excess of fifty different kinds of fabric, is formed from three panels each 1.2 M wide by 2.1 M tall.

“I sat down and calculated all the time it took and in total it was about 700 hours over three months. For that period, it just consumed my life. I had a deadline and I was really pleased that I made that deadline, it was lovely to see it behind her on the stage,” Terri said.

“I made the decision because the project is all about Australia, and the Australian culture is critical to that, when I was making the quilt that all of the fabric that I used should be authentic and designed by indigenous artists.”

“There are a lot of fabrics around that are aboriginal lookalike, that may look aboriginal but they might not necessarily be a genuine indigenous design by an Aboriginal person. For most of the fabrics I am able to say, “this fabric is designed by this person, from this tribe”; I really liked being able to say that.”

Upon her return from Belgium, Terri decided to enter her quilt in the Queensland Quilt show however at over six square meters it was too large to qualify according to the entry conditions.

She entered it into the Art Quilts section of the Royal Queensland Show instead and it won first prize as well as the subsequent higher honour of Best in Show. The quilt was on display at the Old Museum in Bowen Hills during the Brisbane show and will now go on to be displayed at the Queensland Quilt Show after all:

“I had a phone call over the weekend and they have actually asked if they can display it at the Queensland Quilt Show too. So even though I wasn’t allowed to enter it as a competition piece they have decided that it is good enough to display,” Terri laughed.