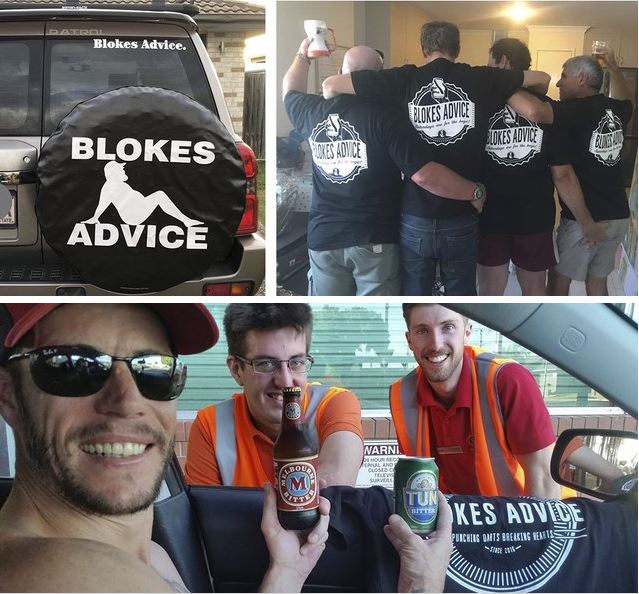 He likes camping and fishing. He is a shift worker and the Vice President of the Gladstone Darts Club. He is also – along with more than half a million other Australian men – a member of the Facebook group “Blokes Advice”.

When he came home from nightshift on Tuesday morning January 9, he thought he’d share a post about the Blokes’ Advice team visiting Gladstone – this Friday afternoon January 12 from 3 pm at the Marina Parklands –  on popular local Facebook site Gladstone Open Discussion.

When he woke up a few hours later he had received over 200 messages and more than 500 likes from people interested in meeting and talking to the blokes behind this social media phenomenon.

When he talked to Gladstone News yesterday ahead of their visit, Dave Paulke, father of Blokes Advice founder Brock – more widely known as “Marksman” –  says taking a good hard look at themselves changed the focus of the group for the better.

“It got to be like to be like a raucous conversation between mates in the pub,” Dave said. “You’ve seen how it happens, later in the evening, after a few drinks, the stories get more extreme; they try to one-up each other.”  He admits sometimes the so-called ‘lads’ humour” went too far.

“Some blokes want the old page back, they really do. But we’re not giving it to them. We say we’re better than that now,” Dave said.

These days the blokes concentrate on supporting the other members, raising money and raising awareness about issues of concern to the men in the Blokes Advice community, including suicide, stress, Family Court matters, relationships, unemployment, mental health concerns, violence, substance abuse, depression and anxiety.

Their merchandise – t-shirts and stickers – is hotly sought after and the Facebook Page – now with more than 560,000 members – well, that is strictly moderated.

“Facebook audit us and will inform us of anything we need to clean up, anything we might have missed,” he said.

“We’ve got 20 admins and 20 moderators. They’re spending up to sixteen hours a day examining the things people post. They go through the page and if they think it’s a bit iffy, they go “Ah, delete!”

“They clean the page up. Facebook gives us the all-clear three hours later,” he said.  “The boys are really moderating it properly. If there’s anything homophobic they just boot the guys off. We’ve got some rules in there, we’ve got some regulations and if you don’t like them then just buzz off, get out of here, we don’t want you,” he said.

“The Facebook page is running perfectly, and it’s loved by a lot of men. It’s also loved by a lot of women,” Dave said. The strength of Blokes Advice, he says is that aside from everyday men’s stories about cars, camping and fishing, men feel free to open up about more personal matters with peers and equals, not people who want to preach to them or judge them.

“There are no girls on our page. If you’re a girl you can’t join. The part of the forum we have about depression and suicide is somewhere a man can open up anonymously if he likes…and a lot of men don’t like to talk to their mates. They want to talk to a stranger. And when they get on our page they feel like they are talking to 560,000 strangers,” Dave said.

“The comments that they get for support, where to go to help, to get fixed up, a bloke will come on and say “Hey, mate, I’ve got the same thing, and this is what I’ve done, this is what’s helped me,” –  what’s happening is it’s becoming a community,” he said.

Dave decided to take the community off the keyboard and on the road, on the Black Dog Awareness Tour which arrives in Gladstone this week.

Outdoors and enjoying a barbecue and beers, hundreds of men have approached the team so far in their stops in Port Douglas, Cairns, Townsville, Airlie Beach, Mackay, Sarina and Emerald.

“What we’re finding is a lot of members are just coming down to say thank you.”

You can meet and talk to Bogo and Marksman from Blokes Advice at the Marina Parklands this Friday from 3pm.