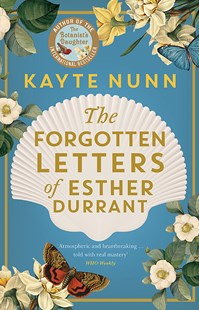 Posted at 07:00h in Lifestyle, Local by News 0 Comments

I was first drawn to this book due to its stunning cover. It shows shells, butterflies and flowers set on an ocean blue background. The images are significant, as the book tells the stories of two women whose lives are intertwined on England’s Scilly Isles near Cornwall. In 1951, Esther Durrant is sent to one of these islands to recover from her depression, staying at a remote house with damaged ex-soldiers, under the guidance of revolutionary psychiatrist Dr Richard Creswell.

In 2018, Australian marine scientist Rachel Parker moves to the islands to research a rare clam. While there, she uncovers a suitcase containing mysterious love letters, and sets out to uncover the people behind the letters.

I’m not really a romance fan, but this story is more of an adventure than a romance. I’m also not a fan of books that are written in two different time periods, but the talented Kayte Nunn manages to maintain such a flow in her storytelling, that I was not confused at all. This book, and others by the author, can be borrowed from Gladstone Regional Libraries.

Kayte Nunn is the author of the bestselling Australian novel “The botanist’s daughter” and others.

Thanks to librarian Sue Norris from Gladstone Regional Libraries.